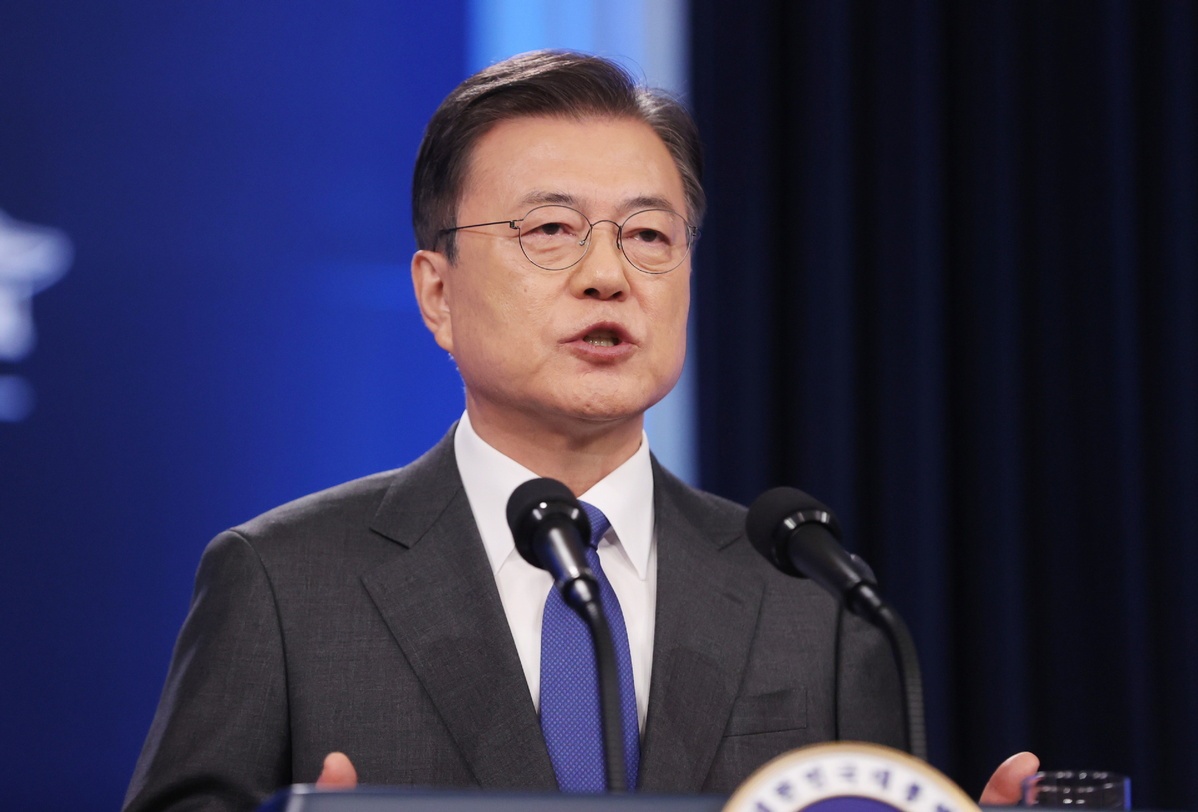 ROK President Moon Jae-in delivers his speech during a news conference at the Presidential Blue House in Seoul, May 10, 2021. (Photo: Agencies)

SEOUL - The Republic of Korea (ROK)'s President Moon Jae-in said on Monday that his government will seek to find a way during the remainder of his presidency for restored talks between ROK and the Democratic People's Republic of Korea (DPRK) and between the DPRK and the United States.

"I will consider the remaining one year of my term to be the last opportunity to move from an incomplete peace toward one that is irreversible," Moon said in a televised address to mark the fourth inauguration anniversary of his five-year tenure. He took office in May 2017.

"It is time to take action," Moon said hailing the Biden administration's DPRK policy, which he said aimed to "achieve the primary goal of the Korean Peninsula's complete denuclearization via diplomacy with a flexible, gradual and practical approach by building upon the foundation of the Singapore Declaration."

Top DPRK leader Kim Jong-un and former US President Donald Trump held their first summit in Singapore in June 2018, agreeing to the complete denuclearization of and the lasting peace settlement on the Korean Peninsula.

Moon is scheduled to visit Washington for summit talks with US President Joe Biden on May 21 in a bid to restore the deadlocked dialogue between the two Koreas and between the DPRK and the United States.

"We (he and Biden) will restore dialogue between the two Koreas and between the United States and North Korea (the DPRK) and find a way to step once again toward peaceful cooperation by more closely coordinating policies toward North Korea," Moon said.

"If there is an opportunity to restart the clock of peace and advance the peace process on the Korean Peninsula, I will do everything I can. I look forward to North Korea responding positively," he noted.

"We have seen clear potential for issues to be solved diplomatically," the president said, citing the three inter-Korean summits and the two DPRK-US summits during his tenure that failed to achieve a complete success but maintained peace.

"If we make a little more effort, the issue will be able to be solved through diplomacy. I found a possibility for and had confidence in the Korean Peninsula's complete denuclearization and the lasting peace settlement," he added.

Following Biden's first Congressional speech in which the US president called the DPRK's nuclear program a "serious threat," Pyongyang warned earlier this month that Washington will "face a worsening crisis" if the United States holds on to the outdated hostile policy towards the DPRK.

Moon said he did not interpret the DPRK response as a refusal to dialogue.

He said the prolonged dialogue deadlock will never be desirable, adding that his worry was shared by the Biden administration, which rapidly established its DPRK policy through close coordination and consultations with Seoul.