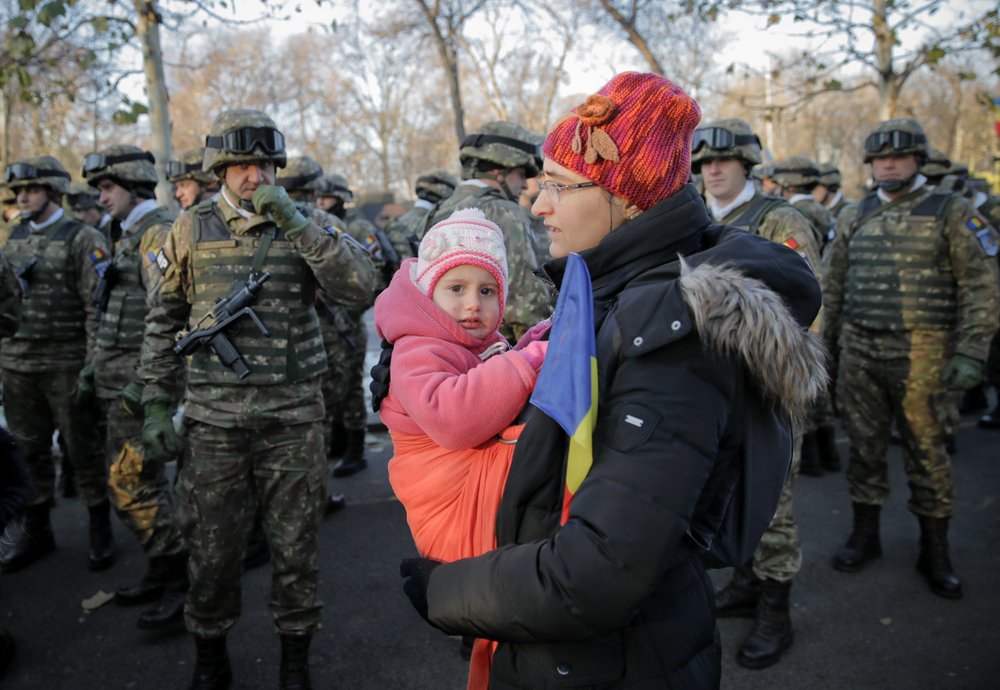 A woman holding a baby walks by troops wait to take part the military parade in Bucharest, Romania, Saturday, Dec. 1, 2018, as thousands turned out Saturday to celebrate 100-years since Romania became a modern-day state, amid concerns about rule of law and the state of democracy. (Photo: AP)

Despite freezing temperatures, tens of thousands of Romanians turned out Saturday to celebrate 100 years since their nation became a modern-day state, and some noted current concerns about the rule of law and the state of democracy in the Balkan nation.

While most considered the event a national celebration, some booed anti-riot police who participated in Saturday’s parade. That anger comes after police clashed in August with protesters decrying corruption in Romania, violence that left 450 people injured.

Members of the ruling Social Democratic Party were booed at a ceremony in Alba Iulia, where President Klaus Iohannis, a political rival, called for Romanians to build a “dignified and powerful country, integrated through education, culture and creativity into a Europe of values, prosperity and freedom.”

US Secretary of State Mike Pompeo on Friday thanked Romania for contributing to global and Black Sea security as a NATO member and participating in missions in Afghanistan and Iraq. His statement said Washington stands with Romania “in its efforts to uphold democratic values and the rule of law...which are ... the foundation of economic growth and prosperity.”

The US and the European Union are among those criticizing a judicial overhaul in Romania initiated by the Social Democrats that they claim will undermine the fight against government corruption.

Anca Palmer, a retired English teacher who lives in Bucharest, was born in 1947, the year the communists came to power. She said her parents and grandparents taught her history and patriotism: “to respect, not to lie, not to steal and not to speak ill of someone.”

Some Romanians planned to celebrate the day with the traditional dish of cabbage rolls stuffed with minced meat and rice and polenta.

Others, however, will attend an anti-corruption protest in Bucharest on Saturday evening demanding that the government scrap the judicial overhaul.

That was partly thanks to Romanian Queen Marie, granddaughter of Britain’s Queen Victoria and of Russia’s czar, who warned the Allied victors there could be an uprising if Romania didn’t reunite with Transylvania, which until the war had been part of the Austro-Hungarian empire.

The end of World War I brought about the end of the sprawling Austro-Hungarian empire.