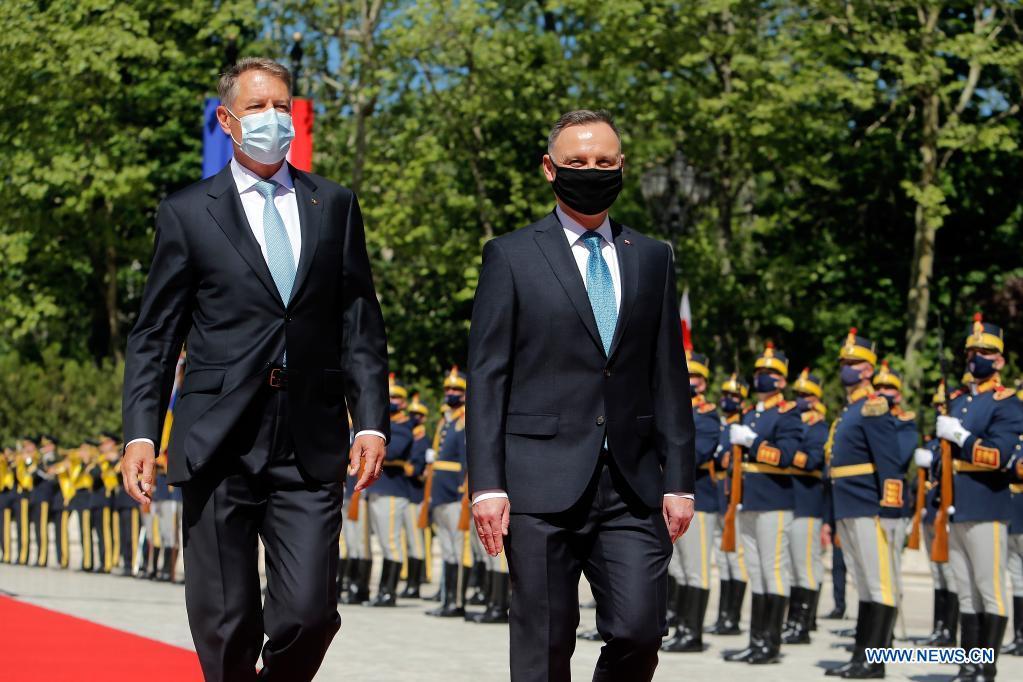 BUCHAREST, May 10 (Xinhua) -- The presidents of Romania and Poland said here Monday that their countries will work to strengthen security in the Black Sea region and the entire eastern flank of NATO (North Atlantic Treaty Organization).

"Our countries will continue to support the consolidation of NATO's deterrence and defence posture on the Eastern flank, its cohesion, as well as the NATO 2030 process," Romanian President Klaus Iohannis told a joint press conference with his visiting Polish counterpart Andrzej Duda after their official talks.

Strengthening regional cooperation under the Three Seas Initiative is a focus of their talks, with an emphasis on the implementation of strategic regional interconnection projects, he said.

Duda, for his part, expressed hope that bilateral defence cooperation could improve, referring to the modernization of the armed forces of the two countries.

He also stressed the importance of investment in infrastructure, such as the Via Carpathia road project, which will boost national economies and strengthen their securities by making it possible to relocate armed forces not only by air but also by land. The highway project will connect Central and Eastern European nations from north to south.

The Polish president's visit took place amidst the 100th anniversary of the conclusion of a Defensive Alliance Convention between the two countries in 1921.

Later on Monday, Iohannis and Duda will host a virtual summit of the Bucharest Nine (B9) format, an initiative launched by the two presidents, in which all NATO members of the eastern flank participate, including Bulgaria, the Czech Republic, Estonia, Hungary, Latvia, Lithuania, Poland, Romania and Slovakia. The first B9 Summit was held in Bucharest in 2015.

U.S. President Joe Biden, along with Secretary of State Antony Blinken, as well as NATO Secretary General Jens Stoltenberg will also take part in the B9 Summit via video-link. Enditem