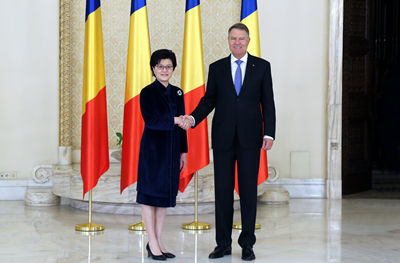 BUCHAREST, April 17 (Xinhua) -- Romanian President Klaus Iohannis said on Tuesday that his country is willing to work together with China to promote development of bilateral relations within the framework of China and Central and Eastern European Countries (CEECs) cooperation.

Iohannis made the remarks in a meeting with Chinese Ambassador Jiang Yu, after receiving the latter's letter of credence.

According to him, the traditional friendship between Romania and China covers all aspects of bilateral cooperation and that he himself is satisfied to see that the scale of cooperation in politics, economy, trade, culture and other fields has continuously expanded in recent years.

She called on the two sides to seize the historical opportunity and take the Belt and Road Initiative and China-CEEC cooperation mechanism as platform to transform the bilateral traditional friendship and political mutual trust into more pragmatic cooperation and people-to-people exchanges, thus benefitting the two peoples.

The Chinese side appreciates the achievements Romania has made since it took over the EU presidency at the beginning of this year, voicing hope that Romania will continue to play a positive and constructive role in the development of China-EU relations, said Jiang.

Iohannis said that as the EU's rotating presidency, Romania is willing to expand and deepen EU-China relations.