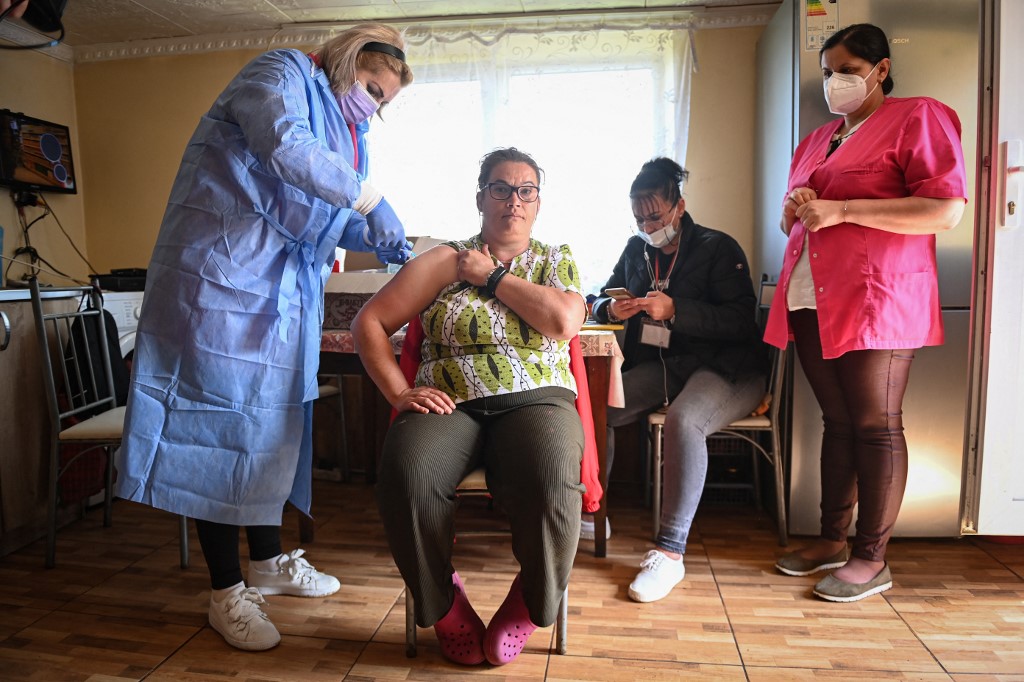 A nurse vaccinates a woman against COVID-19 in the remote village of Poienita Voinii, Romania, on May 13, 2021. (File photo: AFP)

Private events such as weddings, baptisms will be allowed to hold with 50 people indoors and 70 people outdoors.

The number of people in gyms or fitness clubs, at conferences, training courses or workshops in closed spaces will be also increased.

Restaurant occupancy will be raised, while bars, clubs, discos and game rooms will reopen between 5:00 and 24:00 at up to 50 percent capacity, but only for those vaccinated.

Sports events can take place both indoors and outdoors at up to 25 percent capacity.

However, the prime minister stressed that participants in the above activities must have been fully vaccinated for over 10 days, or have a negative RT-PCR or antigen test completed within a specified time.

According to the government, the number of participants can be higher or even up to the maximum capacity if all are vaccinated.

The pandemic situation has improved significantly since mid-May, with the number of daily cases dropping to less than 1,000 from an average of 4,864 in March and 3,415 in April. Single-day death toll exceeded 100 in only three days in May and has stayed in double digit since May 15.

The authorities attributed this to stricter control measures and intensified vaccination.

Currently, vaccines produced by Pfizer/BioNTech, Moderna, AstraZeneca and Johnson & Johnson are being used in Romania.

Globally, 285 candidate vaccines are still being developed -- 101 of them in clinical trials -- in countries including Germany, China, Russia, Britain and the United States, according to information released by the World Health Organization Tuesday.