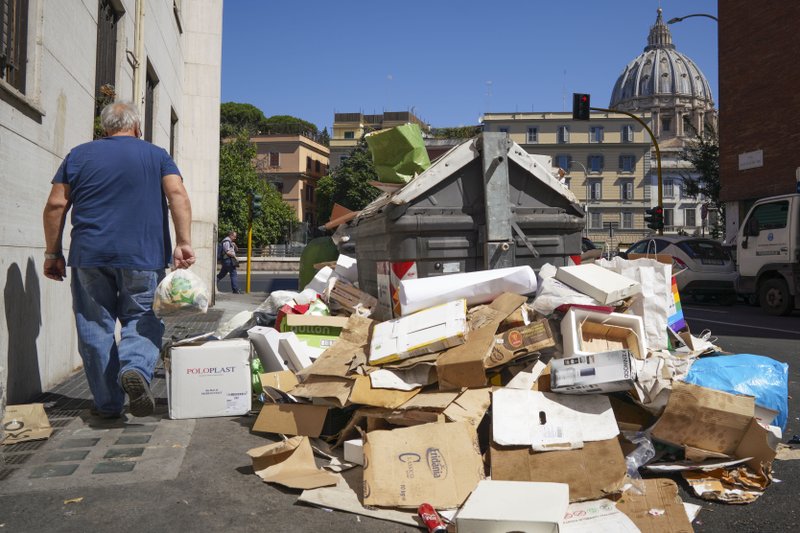 In this photo taken on Monday, June 24, 2019, a man walks past a pile of garbage as St. Peter's Dome is visible in background, in Rome. (Photo: AP)

Doctors in Rome are warning of possible health hazards caused by overflowing trash bins in the city’s streets, as the Italian capital struggles with a renewed garbage emergency aggravated by the summer heat.

Trash disposal is a decades-long problem for the Eternal City. Rome was left with no major site to treat the 1.7 million metric tons of trash it produces every year since the Malagrotta landfill was closed in 2013.

Successive mayors from different parties have all proved incapable of solving the city’s garbage woes, which have re-emerged dramatically since Mayor Virginia Raggi of the populist 5-Star Movement took the helm three years ago.

Raggi’s administration is facing frustration and anger from both tourists and Romans over the piles of trash that threaten peoples’ health and tarnish the city’s image.

“We’ve become the third, fourth world in my opinion,” said Rome resident Rossana Franza. “Mrs. Raggi should take a small stroll here once and a while. Because in her neighborhood, which I have been to, it is all in order.”

Another woman living in Rome who only gave her name as Alessia told The Associated Press that a rat walked by her the other day and she cannot even go outside in the evenings because “there’s an incredible stink.”

Animals like dogs, cats and rats or even birds like seagulls pose a serious health risks as they root around in garbage and spread bacterial infections through their waste or urine, Dr. Roberto Volpe from the National Research Council CNR told The Associated Press.

“The main risk for us comes when we take out and throw the trash away,” Volpe warned. “There’s a risk of taking the contamination back home with us. That’s why it’s important to wash our hands properly afterward.”

Volpe also discouraged angry citizens from setting garbage piles on fire, saying that could cause greater health risks through dioxin contamination, which can lead to cancer.

Officials in Rome, who are often at odds over the possible solutions to the constant waste emergency, do agree on one thing: the garbage problem needs a long-term solution.

“Let’s be honest ... no waste plan can solve a problem aggravated by 60 years of mismanagement in one year,” said Marco Cacciatore, president of the local commission for environmental and city politics in Rome. “Let’s tell the truth to citizens: We are human. This difficult infrastructural situation cannot be resolved in the short term.”