Romney making final pitch ahead of Senate primary in Utah 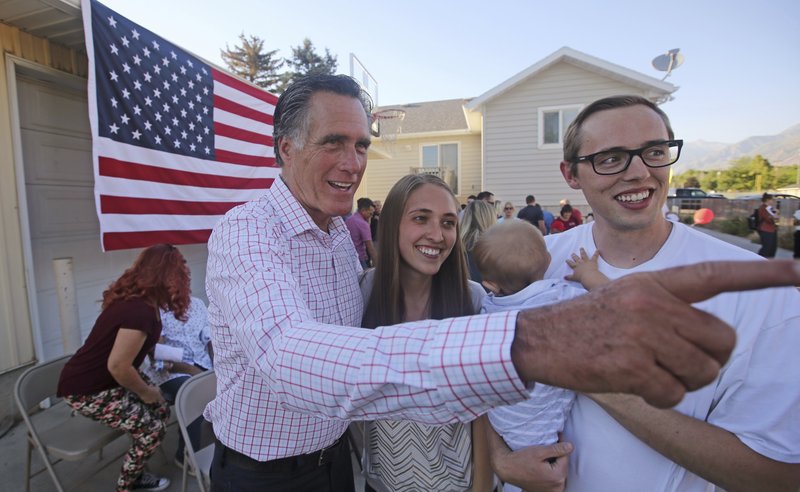 Mitt Romney is flashing his familiar smile at city parks and backyards in Utah’s mountains and suburbs this week, making his final pitch after being forced into a Republican Senate primary Tuesday against a conservative state lawmaker.

His opponent has painted him as an outsider who can’t get along with President Donald Trump, but Romney has quieted his once-strident criticism.

“I’m not someone who’s going to be a daily commentator on everything the president says by any means, but if there’s something of significance that the president says or does, I feel a moral obligation to express my own view,” he told The Associated Press in an interview at a Utah restaurant where heads turned and people stopped to ask for photos.

Romney predicted earlier this month that Trump would win re-election in 2020. He hasn’t endorsed him, though, and declined to do so this week, saying it’s too early and he expects Trump to have an as-yet-unknown challenger for the Republican nomination.

Still, Romney’s tone has changed considerably since the 2016 campaign when he called then-candidate Trump a “phony” and a “fraud.” Things change after a president is elected, Romney said, adding that he’ll get behind good policies while criticizing bad ones.

On immigration, for example, Romney said he supports strong border security including a wall, but he condemned the policy of separating families after illegal border crossings. Trump ended that practice with an executive order Wednesday after a national outcry.

“It’s a heartbreaking circumstance. It puts America in a terrible light around the world,” Romney said.

Romney declined to say, though, whether he’s in favor of the Trump administration’s “zero tolerance” policy that led to the spike in family separations.

As he’s crisscrossed the state’s Western vistas in a 2002 pickup truck with a cracked windshield, the former governor of Massachusetts has walked a fine line on the president, aligning himself with many of his policies while occasionally signaling he’s not in lockstep with his leadership style.

At 71, Romney is looking to re-start his political career in Utah, where he’s a beloved adopted son known for turning around the 2002 Salt Lake City Olympics and for his status as the first Mormon major-party presidential candidate. He spoke Wednesday to a group of neighbors clad in baseball caps and red gingham at a backyard gathering in American Fork, south of Salt Lake City.

Attending was English teacher Claudia Dorsey, 67, a moderate Republican who said she feels “pretty good about Mitt” but is still deciding how she’ll cast her ballot. Dorsey said she’s not a fan of Trump and was sad to see Romney tone down his criticism.

“I’m disappointed, but I can see why he’s doing it,” she said. “In order to get anywhere in the Republican party, you need to be over on that far side, and so that’s very limiting for those of us who, we don’t want to go that far, we want to be more in the middle.”

Romney has been endorsed by Trump and is favored to win in the race to replace long-serving Republican Sen. Orrin Hatch, who is retiring. But he was forced into a runoff primary after a loss at the state’s party convention, where a core group of hard right-leaning Republican party members narrowly chose state Rep. Mike Kennedy. Neither won 60 percent of delegates’ votes to secure the nomination outright.

Kennedy says he’s the true conservative on issues like the national debt and gun rights.

Romney remains the target of animus for some Trump supporters who say he could be a thorn in the president’s side as a senator. Kennedy has channeled that, questioning whether Romney can get along with the president while touting himself as a “refreshing opportunity in Washington to actually get some things done.”

But while Trump critics have been falling in races elsewhere in the country, in majority-Mormon Utah, many voters have long been uneasy with aspects of Trump’s brash style. Trump won the state in 2016, but by a smaller margin than previous GOP candidates.

Still, Kennedy says he’s seen residents who, like him, have become Trump fans. Though he cast a write-in ballot for Ted Cruz in 2016, Kennedy, a family doctor and lawyer, said he’s since been impressed.

The winner of the Republican primary will face Democrat Jenny Wilson. Though any GOP candidate would have a big upper hand in conservative Utah, Romney said that if he wins the primary, he doesn’t plan to let up.

“These are important times for our country and for our state,” he told the backyard crowd. “If I’m lucky enough to become our senator, I will do everything in my power to keep us strong, economically, militarily, but also to keep us good.”