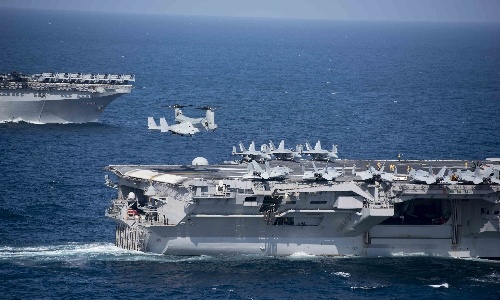 The captain of US coronavirus-stricken aircraft carrier Theodore Roosevelt was relieved of his command for exercising "poor judgment" after raising the alarm about the coronavirus outbreak on the battle ship and asked for approval to dock and  save lives fo the sailors.

Military experts say the captain, Brett Crozier, became a scapegoat for the management flaws in the US military system and manifested misconduct of senior US military officials.

Crozier raised the alarm this week and wrote a strongly worded letter to US Navy leadership to stress his concerns about the outbreak of COVID-19 on the ship, and the letter was leaked to the media.

US Navy said that Crozier was removed for performing "extremely poor judgment" and causing a "firestorm" by widely circulating a memo detailing his concerns. Crozier's letter pushed the US Navy to allow 3,000 sailors on board of aircraft carrier hit by the coronavirus to be taken off the ship by Friday.

The firing of Crozier reflects a rift between the battleship's commander and top Pentagon officers over the severity of infections on the carrier and whether it should continue its combat mission amid an virus outbreak, Zhang Junshe, a senior research fellow at the PLA Naval Military Studies Research Institute, told the Global Times on Friday, adding the Pentagon is probably outraged by revelations of Crozier's letter.

Zhang said that he could hardly imagine the apathy on the part of top-rank US military officers, while they knew the lives of many sailors onboard the ship were seriously threatened by the coronavirus outbreak on the battle ship.

"The US military wanted to keep the aircraft carrier operational so that it will continue to be active in 'deterrence' operations in the South China Sea. This is one of the important reasons why top US Navy officers are not willing to see the entire crew of the aircraft carrier Roosevelt leave the ship," said Zhang.

Song Zhongping, another Chinese military expert and commentator, agreed that Crozier was removed mainly for leaking "secrets" and for opposing decisions from US Navy bureaucrats.

"US Secretary of Defense Mark Asper stressed that the number of confirmed cases in the US military be kept a secret. But the leaked letter, which exposed the secret to the world, is considered a serious breach of the DoD's decision," Song said.

US Navy said Crozier was relieved because he went outside the chain of command and sent his memo over an unsecured system, adding to the chance that it could be leaked, CNN reported.

"The US military is well armed and is reportedly capable of resisting a biological attack. However, so many problems have emerged which explicitly tells that the Navy has many defects, including weak discipline among its ranks," Song said. "Firing a captain cannot resolve the problems. Crozier is obviously a scapegoat."

The top Democrats on the House Armed Services Committee issued a statement calling Crozier's removal "a destabilizing move" and "an overreaction."

Representative Jackie Speier said in a statement that the subcommittee she chairs plans to investigate the circumstances surrounding Crozier's firing, calling it a "heinous act of whistleblower retaliation," American Broadcasting Company (ABC) reported.

There have been 93 positive cases reported on board the Roosevelt , of whom 86 exhibiting symptoms and seven having no symptoms, as of Wednesday. The US Navy has evacuated thousands of sailors from the Theodore Roosevelt in an attempt to contain the spread of the coronavirus on the ship.