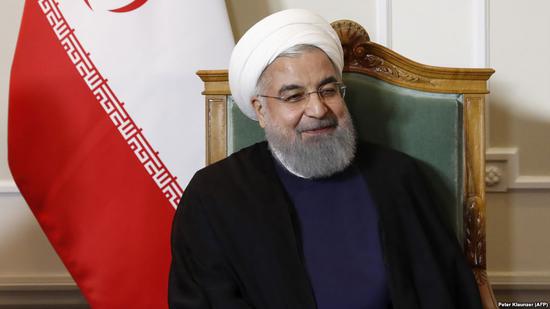 President Hassan Rouhani warned Iranians on Wednesday they may face more difficulties in the months ahead, after the United States imposes new sanctions on the country next week, Iran’s state TV reported Wednesday.

“The situation was hard for people in the recent months, and it may be hard in the next several months too,” said Rouhani, speaking during a televised Cabinet meeting. “The government will utilize its entire capabilities to alleviate the problems.”

According to Rouhani, Washington is trying to make Iranians angry at their government.

“People are in fact angry, but ... they are mad at America and its crimes — not at their government and its ruling system,” he said.

Iran is already in the grip of an economic crisis, and has seen sporadic protests in recent months though Iranian officials have generally tried to downplay the sanctions and their effects.

The government, meanwhile, has been trying to find ways to get around the new U.S. sanctions and expand financial ties with other countries, aiming mainly for the European Union, China and India.

One such attempt is a development from Sunday, when Iran began offering 1 million barrels of oil for sale through its stock exchange for a period of one week — in theory, giving oil dealers, including those from foreign countries, a chance to get their hands on Iranian crude. Previously, Iran has exported its crude to refineries only.

Oil Minister Bijan Zanganeh said 280,000 barrels were sold on the IRENEX exchange so far and 720,000 barrels will be provided later.

It’s unclear how the stock market offering will affect Iranian sales as it’s far below the 1.85 million barrels a day that Iran has sold in October, according to the semi-official ISNA news agency.

Trump pledged last week to do whatever it takes to pressure Iran to halt what he refers to as its “malign conduct” such as nuclear and missile development and support for terror and militant groups that destabilize the Mideast.