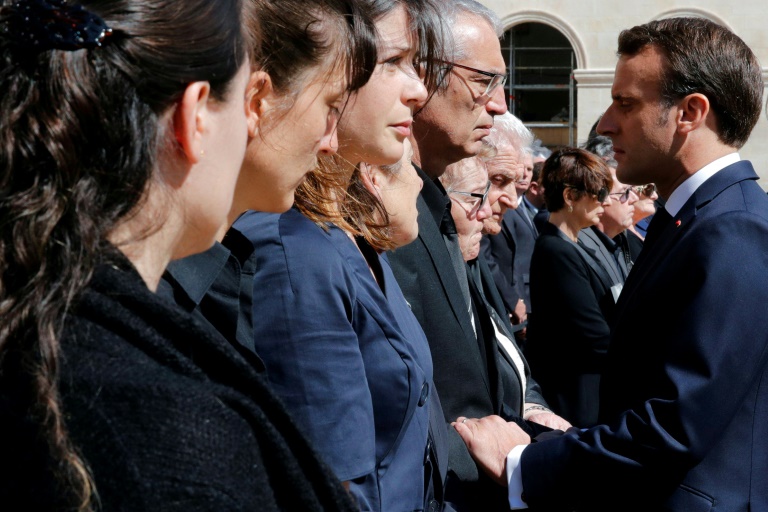 French President Emmanuel Macron, right, spoke with relatives of the two slain soldiers ahead of an honour ceremony at the Invalides in Paris on Tuesday. (Photo: AFP)

France paid its emotional final respects Tuesday to two commandos killed during a raid to rescue four hostages in the Sahel region of Africa last week that has sparked a row over the risks taken by the freed tourists.

French special forces Cedric de Pierrepont, 33, and Alain Bertoncello, 28, who died in the operation in Burkina Faso, were honoured at a ceremony at the Invalides military complex in Paris led by President Emmanuel Macron.

Crowds joined soldiers, firefighters and veterans in lining the bridge leading up to the imposing 17th-century building as the motorcade carrying their coffins made its solemn procession through a sun-lit Paris.

"France is a country that does not abandon its children, no matter the circumstances," a visibly emotional Macron said in his speech during a 45-minute ceremony attended by tearful family members and masked fellow special forces.

"We're here today, before these coffins draped in the colours of the country, to honour the suffering of your families," Macron continued.

"We're here to affirm, with all the force this anger and sadness gives us, that we will never retreat from the fights for which you committed yourself and gave your lives."

The raid last week freed French hostages Patrick Picque and Laurent Lassimouillas, who were seized on May 1 while on a safari trip in a nature park in Benin close to the border with Burkina Faso.

An American citizen and South Korean tourist -- both women whose presence was a total surprise to the French forces -- were also sprung from captivity in the operation overnight on Thursday-Friday.

The kidnapping has shone a spotlight on the rising instability in the vast Sahel region that lies south of the Sahara desert, where Islamist groups aligned to Al-Qaeda and Islamic State have been gathering in strength.

There has been an outpouring of grief in France over the sacrifice of the two soldiers, but also criticism of the French tourists who were visiting an area subject to a travel warning by the foreign ministry.

Leading French daily Le Figaro in an editorial Monday said the freeing of the tourists had "left a bitter taste".

"This tragic event should serve as a warning to our tourists. Our forces are in Africa for a hard and long war and not to pay the price of carelessness," it wrote.

On Saturday, Foreign Minister Jean-Yves Le Drian reprimanded the freed men, aged 51 and 46, for taking "significant risks" by visiting an area that was considered a "red" no-go zone under travel advice issued by his ministry.

French far-right leader Marine Le Pen also criticised Macron over the weekend for going to a military airport south of Paris to meet the tourists off the plane when they arrived back from Burkina Faso.

"The president shouldn't have gone to greet them almost as if they were heroes," Le Pen told the BFM news channel in an interview.

French officials have argued that the raid came in a key window of opportunity as the hostage-takers were planning to transfer their victims to Islamist groups in Mali aligned to either Al-Qaeda or Islamic State.

Lassimouillas admitted that he and Picque should have taken into account the foreign ministry advisories, in a statement read out as the men arrived back in France.

France's special forces units were in attendance for their fallen brothers in arms on Tuesday, prompting warnings to broadcasters not to show any faces that could jeopardise their safety.

Relatives of the slain soldiers held photos of the men as a visibly moved Macron spoke with their tearful partners and parents in the vast cobbled courtyard of the Invalides complex, accompanied by his wife Brigitte.

The hostages were snatched by an armed group while visiting the Pendjari National Park in Benin which borders Burkina Faso.

The border area was considered a red "no-go" zone, while the whole of the park was classed in the intermediate "orange" category by the French foreign ministry, meaning only essential travel was recommended.

The deaths were a reminder of the risks encountered in the region by French forces, who have been deployed in the Sahel since 2013 when France intervened to drive back jihadist groups who had taken control of northern Mali.

A total of 26 French soldiers have died in the deployment including de Pierrepont and Bertoncello.