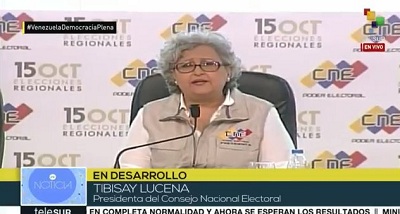 With 61.14% of turnout, the ruling United Socialist Party of Venezuela (PSUV) have won 17 states, while another 5 states in support of the opposition Democratic Unity Roundtable (MUD) coalition.

Venezuelan President Maduro addressed the nation after results: "This is the highest turnout in 15 years."

Early polls suggested opposition candidates could win more than half of the 23 governor seats, but Maduro critics claimed that government-friendly electoral officials have twisted voting procedures to favor official candidates.

In a speech on Saturday, Maduro said Sunday's elections would be an achievement of Venezuela's "revolutionary democracy and socialist democracy"