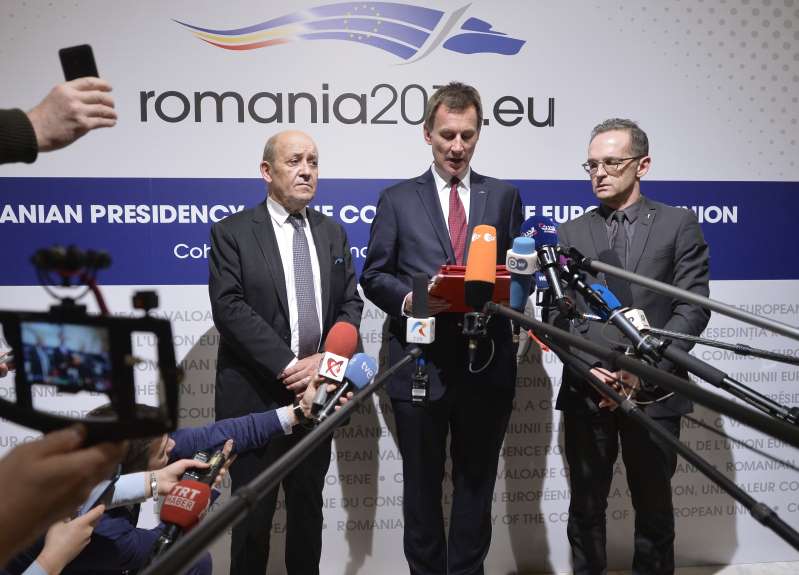 Russian politicians on Friday blamed the United States for undermining global security by ending compliance with a nuclear arms treaty, while European countries watched with dismay and NATO said Russia was at fault for the pact's demise.

The Intermediate-Range Nuclear Forces treaty had been a cornerstone of international security since the United States and the Soviet Union signed it in 1987. The treaty bans the development, deployment and testing of land-based nuclear weapons with a range of 500 to 5,500 kilometers (310-3400 miles).

The US announcement that it would stop observing the treaty as of Saturday and would withdraw from it within six months came after years of dispute between Moscow and Washington, each claiming the other was in violation. In particular, the United States said a new Russian missile breached the treaty.

But Russia accused the United States of unilaterally seeking to neuter the treaty and of resisting Russian attempts to resolve the dispute.

"I 'congratulate' the whole world; the United States has taken another step toward its destruction today," Konstantin Kosachev, head of the foreign affairs committee in the upper house of parliament, said after the announcement.

"This step carries a threat to the entire system of international security, but first of all for Russia because after leaving the INF the Americans will deploy these missiles in European countries," said another senator, Igor Morozov.

But the end of the treaty could also serve Russia's strategic interests, removing any obstacle to deploying intermediate-range missiles that could reach Europe and China.

US officials had expressed worry that China, which is not party to the treaty, is gaining a significant military advantage in Asia by deploying large numbers of missiles with ranges beyond the treaty's limit. Leaving the INF treaty would allow the United States to counter the Chinese, but it's unclear how it would do that.

The US move was regarded with anxiety in Europe.

Minutes after the US announcement, NATO nations urged "Russia to use the remaining six months to return to full and verifiable compliance to preserve the INF Treaty."

NATO says that if Moscow fails to destroy all new missile systems that Washington insists violate the treaty, "Russia will bear sole responsibility for the end of the treaty."

Before the withdrawal announcement, European Union foreign policy chief Federica Mogherini called on both sides to stick to the treaty.

"What we definitely don't want to see is our continent going back to being a battlefield or a place where other super-powers confront themselves. This belongs to a faraway history," Mogherini told reporters in Romania.

Belgian Foreign Minister Didier Reynders added that "The fear is to see proliferation, to see nuclear weapons developed, which are weapons that are dangerous for the entire territory of Europe."

The Europeans are keen to avoid a repeat of the missile crisis in the 1980s. NATO allies decided to deploy US cruise and Pershing 2 ballistic missiles in Europe in 1983 as negotiations with Moscow faltered over its stationing of SS-20 missiles in Eastern Europe.

Ministers from the Baltic countries that border Russia — Lithuania, Latvia and Estonia — were mostly in support of the US move and blame Russia.

Lithuanian Foreign Minister Linas Antanas Linkevicius said that losing such a treaty always means "less stability, more uncertainty, definitely it's bad. But I'm saying what is the option, what is the recipe to say that countries must comply (with) the agreements they made?"