UNITED NATIONS, Sept. 6 (Xinhua) -- Britain and Russia traded words at the UN Security Council on Thursday, with the former pointing the finger at two Russian agents behind the March nerve-agent attack in Salisbury and the latter rejecting the claim as anti-Russian hysteria. 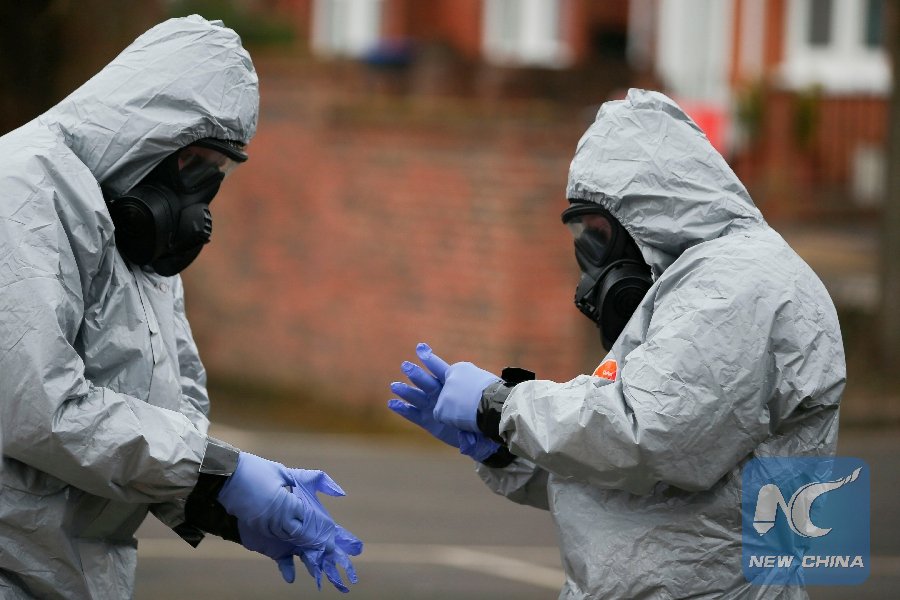 Military personnel wearing protective coveralls work to remove vehicles from a cordoned off area behind a police station in Salisbury, southern England, on March 11, 2018, as investigations and operations continue in connection with the major incident sparked after a man and a woman were apparently poisoned in a nerve agent attack a week ago. (File photo: Xinhua)

The meeting follows evidence Britain released on its investigation into the incident in the British city that left former Russian intelligence officer, Sergei Skripal, his daughter Yulia, and a local police officer, seriously injured.

In July, two additional people living in the Salisbury area were exposed to the chemical, and one died as a result.

Britain alleged that the deadly chemical is the Soviet-era nerve agent, Novichok. In April, the Organization for the Prohibition of Chemical Weapons agreed with that assessment.

Britain's Permanent Representative to the UN Karen Pierce told the council that her country's investigation had identified two Russian nationals, who traveled under the names of Alexander Petrov and Ruslan Boshirov, both members of the Russian military intelligence service, as those behind the attack and has issued international arrest warrants for them.

"I am not going to go through the list of this unfounded and mendacious cocktail of facts," he said.

Russia had offered to help the investigation, he said, but "London has been refusing us this cooperation. London needs this story for just one purpose -- to unleash disgusting anti-Russian hysteria and to involve other countries in this hysteria."

Citing several inconsistencies in the allegations, the Russian envoy said it remains impossible to know the real names of the suspects and therefore whether they are connected to the Russian Military Intelligence Service.

He said that the charges were yet another part of the "post-truth world" crafted by Western countries, rejecting Britain's sensational disclosures, as well as all unfounded allegations about the Russian government's involvement in the Salisbury incidents.

Several other council members, including the United States and France, extended their support for the British investigation and its findings, while countries like Bolivia called for restraint, warned against any "slinging allegations," and proposed the use of diplomatic channels to resolve the dispute over the incidents.