MOSCOW, Oct. 8 (Xinhua) -- Russia is closely monitoring U.S. moves to develop new weapons, but it will not be drawn into a new arms race as the country has unique and advanced weapons of its own, the Kremlin said Tuesday. 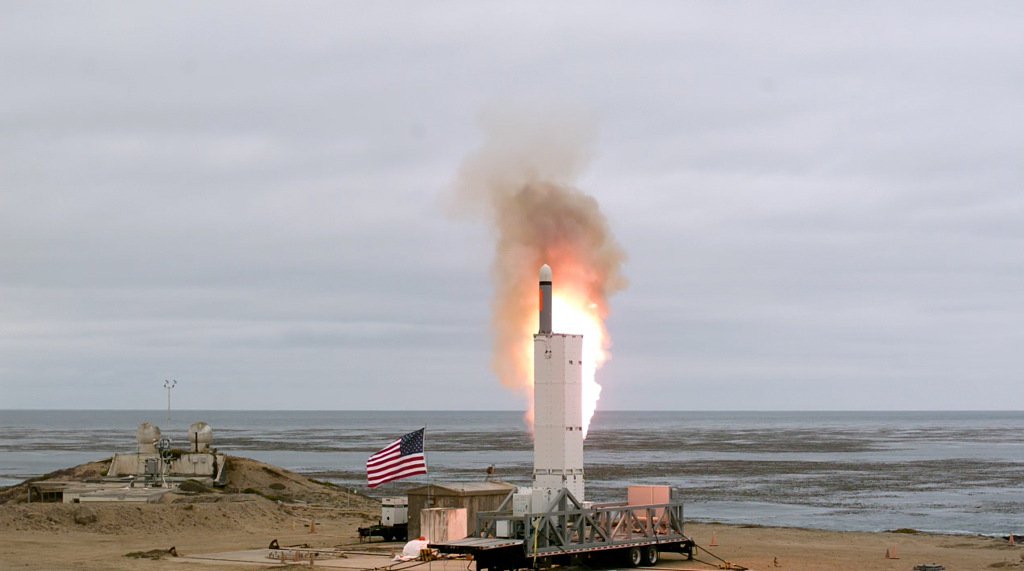 In this handout video grab released by the Defense Department of the US, a test medium-range ground-launched cruise missile exits its ground mobile launcher at the US Navy-controlled San Nicolas Island off the coast of Los Angeles, California, United States. (Photo via VCG)

"We, in fact, are very closely observing the steps that Washington is taking in terms of developing new weapons systems," Kremlin spokesman Dmitry Peskov said.

Speaking to reporters, Peskov said that President Vladimir Putin had warned that Russia would not be drawn into a potential arms race, "because it has made a step forward and is years ahead in terms of technological superiority to ensure the security of our country."

U.S. President Donald Trump said last Monday at a U.S. Armed Forces ceremony that the United States has the newest secret weapons that "nobody has ever even heard of," adding that he hopes these weapons would never be used.

In August, Putin said at a meeting with Russia's Security Council that Russia does not want and will not be dragged into a cost-intensive arms race, which would be destructive to its economy.

But it had to develop new and truly unique advanced weapons, as the U.S. unilateral withdrawal from the Anti-Ballistic Missile Treaty in 2002 forced Russia to enhance its security, Putin said.

According to Peskov, it was U.S. research work on the creation of medium-range missiles in violation of the former Intermediate-Range Nuclear Forces (INF) Treaty that "became the reason for the destruction of this very important international security document."

Moscow and Washington have accused each other of violating the agreement in recent years amid increasing tensions.