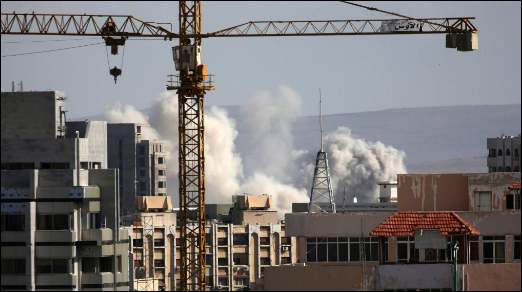 A construction crane is seen as smoke rises from Yarmouk Palestinian camp in Damascus, Syria, on April 21, 2018. (Photo: VCG)

Russia's Defense Ministry confirmed on Saturday that it had proposed cooperating with the US on Syrian refugees and de-mining in a letter sent to the top US general in July.

The proposals on refugees concerned a refugee camp in Rukban, the ministry said in a statement.

The proposal was sent in a July 19 letter by Valery Gerasimov, the chief of the Russian military's General Staff, to US Marine General Joseph Dunford, chairman of the Joint Chiefs of Staff.

"Chief of the Russian Armed Forces General Staff, General of the Army Valery Gerasimov, replied to Joseph Dunford's request following the Helsinki meeting on June 8 this year informing his colleague about measures being assumed by the Russian Federation together with the Syrian government to stabilize the situation in the Syrian Arab Republic," the ministry said.

Earlier several news outlets reported that Gerasimov had informed the US top command authorities in a letter about Moscow's proposal to cooperate on Syrian restoration.

In the letter, Gerasimov said Moscow was ready to discuss with Damascus safety guarantees for refugees stranded at Rukban, as well as creating conditions for their return home.

Meanwhile, it expressed disappointment that the American side has failed to "observe agreements on making the contacts' content public only upon consultation of both sides."

"The existing communication channel between the Russian Armed Forces General Staff and the US Joint Chiefs of Staff makes it possible to prevent incidents between our armed forces and find mutually acceptable solutions taking into account the interests of both states. We expect the American side to assume necessary measures to prevent violations of mutual agreements in the future," the ministry noted.

Rukban lies within a 55 km so-called de-confliction zone set up by the US to ensure the safety of its garrison close to the Iraqi-Syrian border.

"A proposal was also made to coordinate humanitarian de-mining, including in Raqqa, and other priority humanitarian issues," the Russian ministry said.

The proposal illustrates how Russia is now pressing Washington and others to aid the reconstruction of areas under its control.

According to a US government memo, the US policy was only to support such efforts if there were a political solution to end Syria's seven-year-old civil war, including steps like UN-supervised elections.

Rebuilding Syria will also be a massive effort, costing at least 250 billion US dollars, according to one UN estimate.