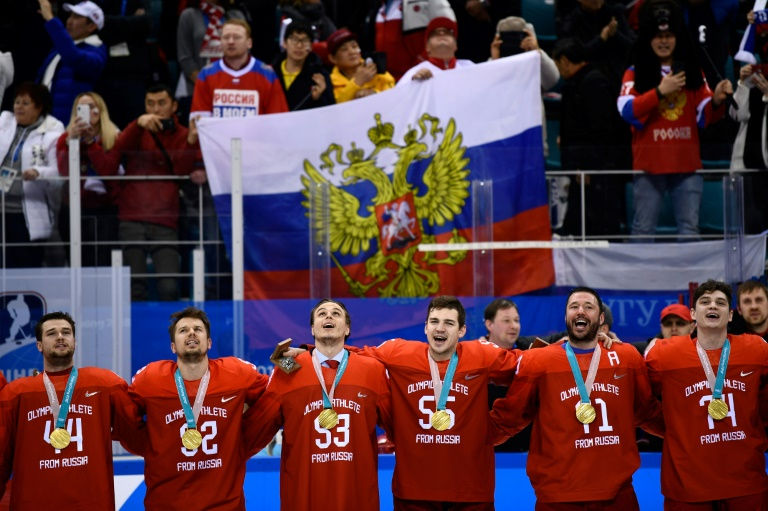 The Olympic Athletes from Russia sing the national anthem after receiving the gold medal for ice hockey. The team were welcomed home as heroes in Moscow Monday.

Russia's team competed as "Olympic Athletes from Russia" (OAR) and were unable to fly the national flag at the closing ceremony.

Yet the mood was buoyant as fans feted athletes including the men's ice hockey team, which on Sunday won the country its first Olympic title for 26 years against Germany, and 15-year-old figure skating sensation Alina Zagitova, all decked in gold medals.

A crowd carrying flowers and balloons and chanting "Well done!" greeted the athletes as they arrived at Moscow's Sheremetyevo airport.

The head of the Russian Olympic Committee Alexander Zhukov thanked the athletes for making the decision to compete despite the obstacles, which he said their performance had ultimately swept away.

"Many had doubts about whether to go to these Olympics but I"m sure that now no one doubts that on Sunday the gold medal for hockey was won by the team from Russia, and no other," he said.

"Our athletes performed with Russia in their hearts," Zhukov said.

Russian ice hockey player Sergei Andronov, who played in the gold medal-winning side, gave a defiant speech, hugging his daughter.

"Thanks to our leadership for helping and allowing our team to play at the Olympics. We proved once again that you can't break our country. That only makes us stronger," said the player for Russia's CSKA.