Russia hands over hosting mantle of World Cup to Qatar 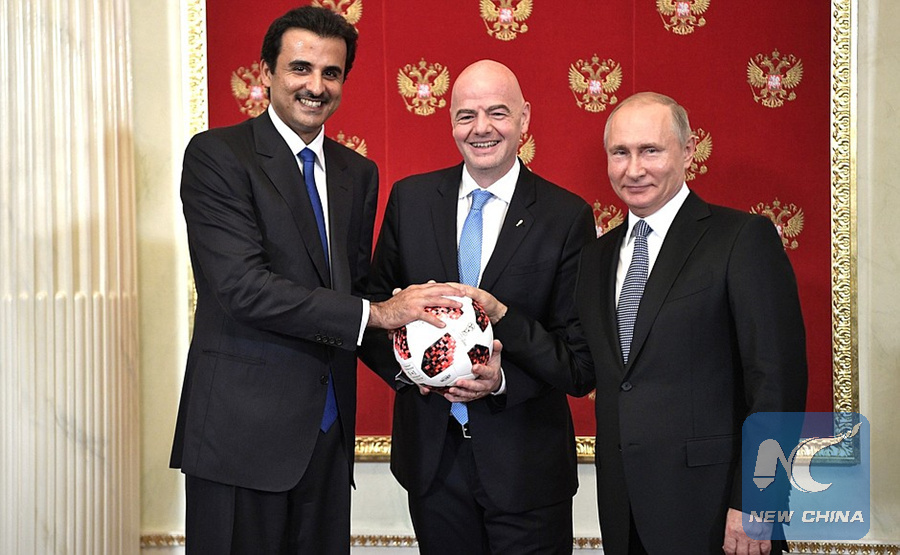 Emir of Qatar Sheikh Tamim bin Hamad Al Thani, FIFA President Gianni Infantino and Russian President Vladimir Putin (L-R)pose for a photography at a ceremony to transfer the authority to Qatar to host the World Cup 2022 at the Kremlin in Moscow, Russia on July 15, 2018. (Photo: KREMLIN )

At a ceremony held at the Kremlin's Armorial Hall, Putin handed over a red and white World Cup football to the emir of Qatar, where the next world football championship will be held from November 21 to December 18, 2022, according to a Kremlin statement.

Putin said Russia is proud of its achievements in hosting the World Cup and is happy to share its experience with Qatar.

"I am sure that our friends from Qatar will be able to host the FIFA World Cup in 2022 at the same high level. And, of course, we are ready to share our experience of hosting the World Cup this year with our friends in Qatar," Putin said.

The final match of the 2018 tournament will be held later on Sunday at the Luzhniki stadium in the Russian capital city Moscow, with France playing against Croatia.