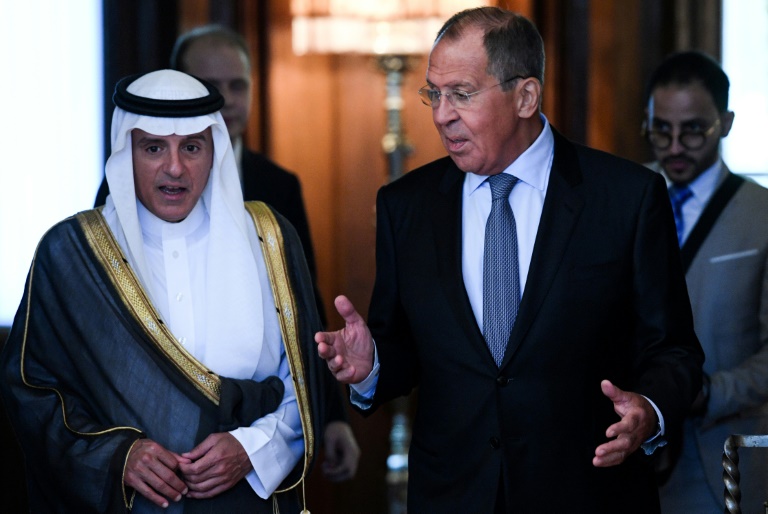 Russia on Wednesday called on the West not to stand in the way of an "anti-terror operation" in Syria's Idlib, as speculation grows Damascus is planning a Russian-backed offensive on the rebel-held province.

"I hope our Western partners will not give in to (rebel) provocations and will not obstruct an anti-terror operation" in Idlib, foreign minister Sergei Lavrov said at a press conference with his Saudi counterpart Adel al-Jubeir in Moscow.

Lavrov also said that there is "full political understanding" between Russia and Turkey, who support opposing sides of the Syrian civil war but are currently in intense negotiations to ensure Idlib does not become a breaking point in their alliance.

"It is necessary to disassociate the so-called moderate opposition from terrorists and at the same time prepare an operation against them while minimising risks for the civilian population," Lavrov said.

"This abscess needs to be liquidated."

Lavrov went on to accuse the West of "actively heating up" the idea of a "so-called planned chemical attack by the (Syrian) government."

Over the last week, Moscow has accused Syrian rebels of planning to stage a chemical attack in the northwestern province that would "provoke" Western strikes on its ally Damascus.

It also accused British secret services of being "actively involved" in the plot.

This week Russian media reported Moscow is reinforcing its military presence in the Mediterranean near Syria.

In April, the US, France and Britain launched joint missile strikes on Syrian targets in response to an alleged chemical weapons attack in the town of Douma that left scores of people dead.

Russian stuck by its ally Syria and angrily insisted the Douma attack was staged by the White Helmets volunteer rescue service.

Russia, a long-time ally of Syria, launched a military intervention in 2015 to support the embattled regime of President Bashar al-Assad, a move that changed the course of the war.

Damascus still holds the southeastern tip of Idlib, a strategically important province adjacent to Latakia on the Mediterranean coast that is home to Assad's clan.

More than 350,000 people have been killed and millions displaced since Syria's war started in 2011 with the brutal repression of anti-government protests.