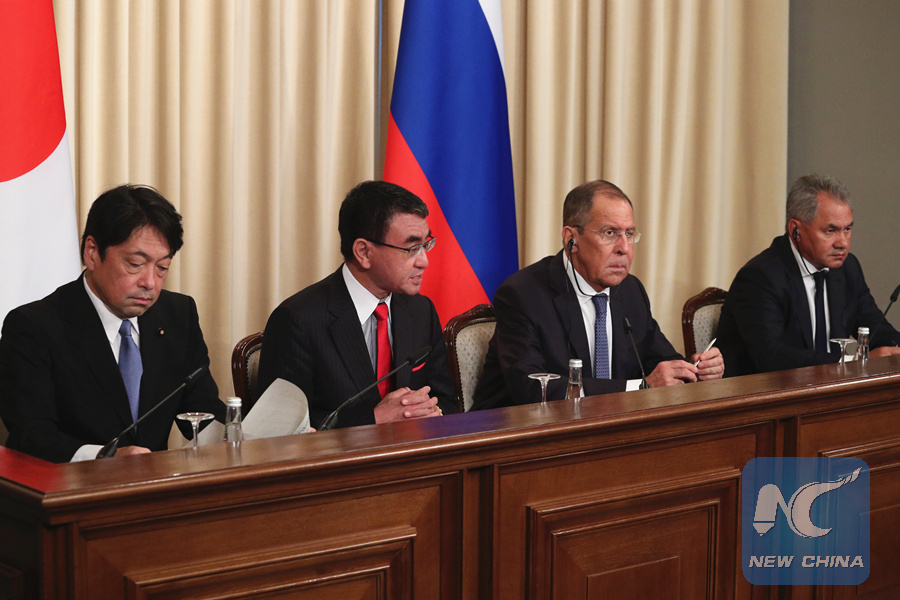 Russian foreign and defense ministers and their Japanese counterparts on Tuesday agreed to explore further cooperation in the sphere of security, the Russian Foreign Ministry said.

The consensus was reached at the third round of the ministerial consultations between the two countries in the "2+2" format, according to a transcript of the ministry.

"Both sides expressed readiness to expand practical cooperation in the sphere of security. We are united in the fact that the situation in the Asia-Pacific region is very difficult, as in the world arena as a whole," Foreign Minister Sergei Lavrov said.

In particular, the ministers confirmed the focus on cooperation in the field of combating terrorism, ensuring international information security and combating corruption, the minister said.

They also welcomed the positive developments on the Korean Peninsula and urged all parties involved to maintain the fragile peace process with restraint and flexibility.

"Russia and Japan are in favor of ensuring that the problems of the peninsula are resolved in a comprehensive manner, taking into account the interests of all states located in North-East Asia," Lavrov said.

The two sides also exchanged views on issues related to the Middle East and Syria, with special attention on humanitarian tasks including facilitating the return of refugees, aid deliveries and restoring infrastructure.

The "2+2" format was first adopted at a Russian-Japanese meeting in Tokyo in November 2013. Following the breakout of the Ukraine crisis in March 2014, Japan suspended the negotiations, which were not resumed until March 2017 when the ministers met in Tokyo.