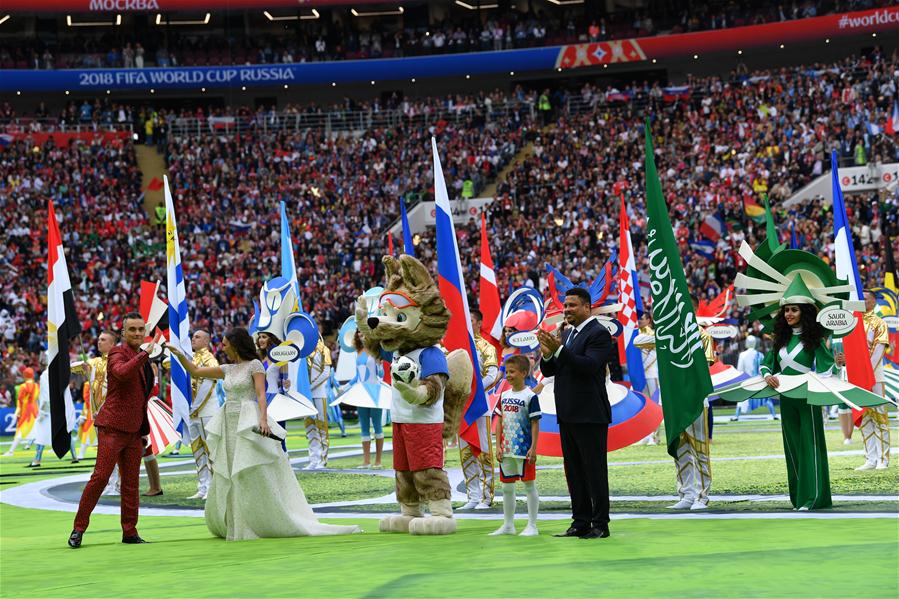 Upon outlining plans to host the 2018 World Cup eight years ago, Russian President Vladimir Putin envisaged a celebration of football "filled with passion and emotion".

On Thursday, in a glittering opening ceremony witnessed by 80,000 fans at Moscow's Luzhniki Stadium and a worldwide audience of hundreds of millions, that promise came to fruition.

It also included emotive performances from Russian musicians Yuri Bashmet, Daniil Trifonov and Alexander Boldachev. In addition, some 500 dancers, gymnasts and trampolinists took part in the show, as did 140 volunteers.

The theme of the World Cup is Live it Up and after a reflective opening to the soundtrack of classical music, spectators were brought to their feet with Williams' 2000 hit Rock DJ and a dazzling fireworks display.

Russia spent around 12 billion US dollars to prepare for the World Cup, including new and revamped stadiums, training facilities, hotels and transport links.

Another 200 million dollars have been spent on legacy programs such as youth development initiatives and refurbishments to ensure facilities do not go to waste after the event.

"Our country is ready to host the FIFA World Cup, and provide everyone who will come to Russia with maximum comfort and the best emotions possible," Putin said during the week at the 68th FIFA Congress, held in Moscow.

Despite concerns about some stadium delays, organizers have declared all venues ready for the mega-event.

So with preparations complete, the football world's attention has now shifted to the action on the pitch. And early indications suggest that this will be an enthralling tournament.

Unlike previous World Cup finals, where the title contenders can often be narrowed down to three or four teams, this year's edition is wide open.

Brazil and Germany are the slight favorites, having both breezed through qualifying. Their superb World Cup record - between them they have won nine of the 20 previous tournaments - means it almost seems their right to progress to the latter stages of the competition.

Brazil are looking particularly sharp. The Selecao have won 17 and lost just one of their 21 matches since coach Tite took charge in June 2016. Adding to the optimism in the South American team's camp has been the successful recovery of Neymar from a foot injury. Following three months on the sidelines, the 26-year-old made a scoring return in Brazil's 2-0 friendly victory over Croatia on June 3. He followed that with another goal in Brazil's final World Cup warmup match against Austria a week later, which Brazil won 3-0.

Despite their unconvincing form in recent friendlies, Germany's talent and depth suggest that a repeat of their 2014 title is a major possibility. Arguably the defending champions' biggest strength is the tactical mastery of coach Joachim Low, who has taken the use of data analytics to a new level and has proven himself to be an astute reader of the game.

Spain, rated among the frontrunners by most pundits a week ago, now look in disarray. Wednesday's shock sacking of coach Julen Lopetegui, which came a day after it emerged that he had agreed to coach Real Madrid after the tournament, will likely take its toll on the 2010 champions. Months of preparations under Lopetegui have been thrown out the window and the Roja must now adapt to new tactics, systems and ideas of interim coach Fernando Hierro. They have been given less than 72 hours to do so before their World Cup opener against Portugal.

France's raft of young forwards - including Antoine Griezmann, Kylian Mbappe and Thomas Lemar - means they must be considered a threat, even if that level of quality is not quite matched in midfield or defence.

Argentina must be considered a chance, if only for the presence of Lionel Messi in their team. However there are serious doubts about whether the Albiceleste's midfield can cut it against their stronger rivals.

Belgium's golden generation shows no signs of fading and, just like in 2014, they will enter this tournament as a good chance of at least making it to the last eight. There are few weakness in Roberto Martinez's squad and opposition defences will not be looking forward to quelling the attacking threat posed by Eden Hazard, Romelu Lukaku and Kevin de Bruyne.

Others with outside chances of reaching the latter stages of the tournament are Portugal, Denmark, Uruguay, England and Colombia.

In a tournament that brings together the world's biggest footballing nations, China is again conspicuous by its absence. The Asian giants have qualified for the event only once before: the 2002 tournament in Japan and South Korea.

Hopes of earning a berth in Russia were dashed after finishing behind Iran, South Korea, Syria and Uzbekistan in their Asian qualifying group.

However the national team looks destined for a change of fortunes in the near future as government efforts to develop the game locally begin to take effect.

Football has been a compulsory part of school curriculums for several years, coinciding with the opening of tens of thousands of football-themed schools.

A reform and development plan introduced in 2015 outlined a roadmap for success. Its key aims were to promote effective management, expand the number of professional clubs and top-level leagues, strengthen the national team and ramp up investment in grassroots football.

In addition, the Chinese Football Association (CFA) was separated from the State General Administration of Sports. The CFA now enjoys more autonomy over its finances, personnel management and matters directly related to football.

The aim is not only to qualify for the World Cup, but to one day win it.

"It is a pity that we missed out on a play-off spot by just one point, it was so close," Chinese football chief Cai Zhenhua said. "I should say that our boys impressed the fans with their tenacious fighting spirit. We know there is a big gap between the world's best and us, and that's what we are fighting for."

Cai stressed that he expects Team China will go further in future World Cups, starting with the next tournament in Qatar. And he vowed that the team will not be dispirited by past disappointments.

"We cannot neglect our progress just because of several losses. We made the final round of qualifying," he said.

He cited the team's recent rise in the FIFA world rankings as reason to be optimistic. China are currently 75th, up from 97th at the end of 2014. In October last year the team climbed to No. 57, its highest ranking since reaching 54th place in 2004.

Li Yuyi, vice-president of the Chinese Football Association said there is still a long way to go for the country to reach its targets. "Chinese football is not competitive enough internationally now, we must set a goal and a pragmatic agenda to follow up," said Li.

That is why efforts to find and nurture new talent are ongoing. In April, Spain's La Liga renewed its agreement with the China Education Association for International Exchange (CEAIA), which has seen over 100 Spanish football managers travel to China to help coach over 15,000 youngsters since 2015.

Football at the grassroots level is now under the charge of the Ministry of Education (MoE), which has been aligned with the National Development and Reform Commission, the Ministry of Finance, the State General Administration of Sports and the Communist Youth League of China, among others, to create the National Youth Campus Football Leading Group Office.

This working group has been tasked with supplying 85,000 on-campus football fields by 2020 and 50,000 football-featured schools by 2025, with the aim of unearthing a team that can compete on the global stage.

The Ministry of Education said in February that 200 Chinese universities are expected to have high-caliber men's and women's football teams in the near future.

China added more than 70,000 new physical education teachers nationwide during the period, 15,000 of which had a football background. Some 360 foreign teachers were also employed by schools for football education.

While the national football team is absent in Russia, China is well represented in the list of official World Cup sponsors. Among them are Wanda, Hisense, Vivo and Mengniu. In addition, Russian restaurants have been given a Chinese flavor after local suppliers imported 100,000 crayfish from Hubei province for the event.

From a football perspective, China can now look to draw inspiration from afar over the next month as the 32 competing teams in Russia vie to lift the game's most coveted trophy on July 15.