MOSCOW, July 30 (Xinhua) -- The Russian Investigative Committee said Tuesday that it had opened criminal proceedings against organizers and participants in an unauthorized local rally on Saturday. 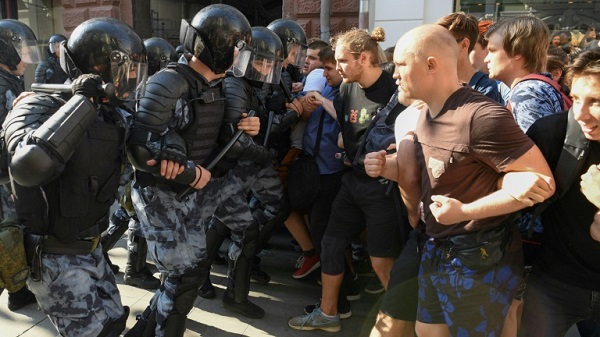 Police and protesters face off at a demonstration in Moscow, Russia, July 27, 2019. (Photo: AFP)

"As established by the investigation, on the eve of the unauthorized action, a group of persons repeatedly posted on the Internet appeals to take part in the rally, knowing that these actions could provoke riots," it said.

"As a result, on July 27, 2019, participants in the uncoordinated action in the center of Moscow ignored the legal demands of the authorities, grossly violated public order, used violence against the authorities, broke the cordon, stepped onto the roadway, paralyzed the traffic on Moscow's Garden Ring, and also committed other illegal actions," it said.

On Saturday, demonstrators protested against Moscow authorities' decision to ban several opposition candidates, who allegedly used fake signatures on their nominating petitions, from the city council election in September.

Moscow police estimated the number of participants in the rally at 3,500, including 700 journalists and bloggers, while the opposition said the total number could be as high as 15,000. Police detained over 1,000 people.

Most of the detainees were released, pending trial and some were fined, but Russia's top opposition activist Alexei Navalny was arrested for 30 days for initiating the rally.

Several other Navalny allies were also put into custody for 7 to 30 days, according to media reports.