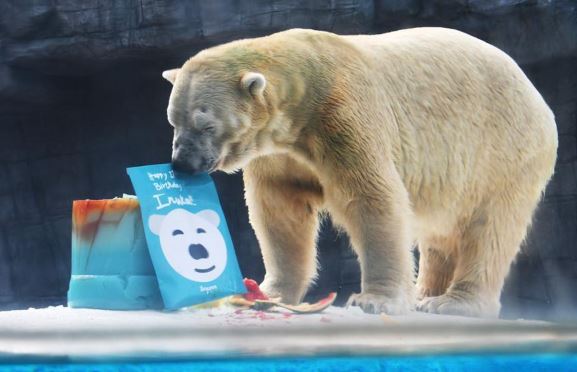 Polar bear Inuka plays with its birthday card during its birthday party at the Singapore Zoo, on Dec. 26, 2017. (File photo: Xinhua)

MOSCOW, Feb. 19 (Xinhua) -- A 10-day state of emergency imposed on the Arctic Novaya Zemlya Archipelago in Russia over an invasion of polar bears has been lifted, the press office of the governor of the Arkhangelsk Region said Tuesday.

"The situation has stabilized and the state of emergency has been lifted," it said in a statement.

It said that one of the reasons for the invasion was the presence of a household waste deposit near the settlement of Belushya Guba, which attracted polar bears in search of food.

The Arkhangelsk regional government has decided to burn the waste in a certified incinerator plant.

The archipelago administration said on its website that the state of emergency was imposed on Feb. 9 after some 52 polar bears invaded the settlement.

There were cases of aggressive behavior by the polar bears, including the pursuing people and breaking into residential and office premises, it said in a statement.