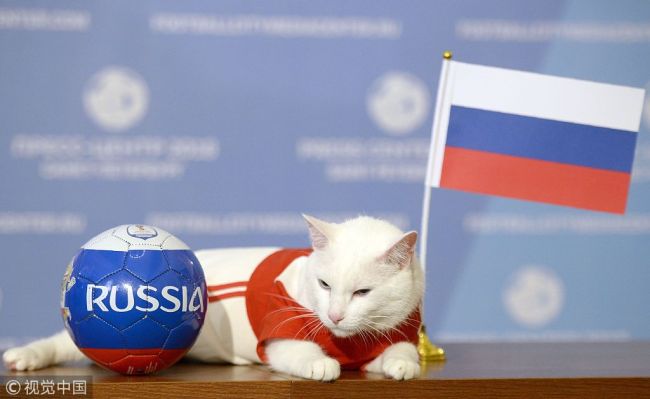 The cat is out of the bag! And Russia is the winner.

Achilles, a cat at the State Hermitage Museum, has predicted the result of the 2018 FIFA World Cup opening match between Russia and Saudi Arabia.

The prediction took place a day before the match at the House of Journalists in St. Petersburg on Wednesday. Achilles selected Russia as the winner, choosing between two cat food bowls with the flags of the participating countries.

Achilles serves as a mouse hunter at the museum where he lives. The white, male cat is fully deaf. Previously, he has selected the right outcomes of three out of four 2017 Confederations Cup matches played in St. Petersburg, including the opening and final matches.

The World Cup will be played at venues across Russia until July 15.

Top image: Achilles the cat, one of the State Hermitage Museum mice hunters, attempts to predict the result of the opening match of the 2018 FIFA World Cup between Russia and Saudi Arabia during an event in Saint Petersburg, Russia June 13, 2018. (Photo: VCG)