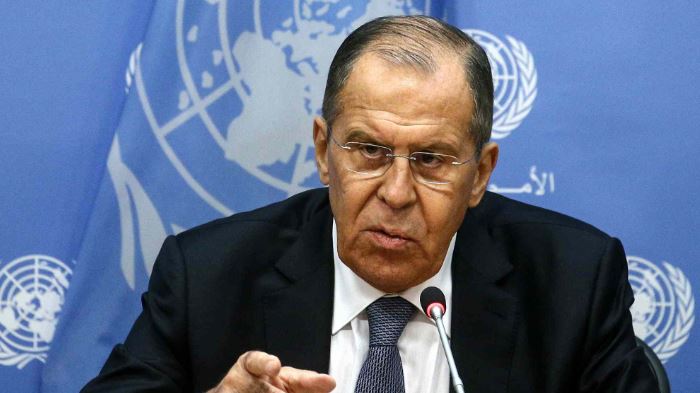 Russia's foreign minister on Friday accused the West of resorting to "political blackmail, economic pressure and brute force" to prevent the emergence of rival global powers.

"These powers do not hesitate to use any methods including political blackmail, economic pressure, and brute force," Lavrov told the assembly.

Lavrov noted that the "international relations are going through quite a complicated and controversial historic period" as the world transitions to multipolarity and there is "a collision of two opposite trends."

"We see the strengthening of polycentric principles of the world order... On the other hand, we see the desire of several Western states to retain their self-proclaimed status of 'world leaders' and to slow down the irreversible objective process of establishing multipolarity," Lavrov said.

"Our Western colleagues are persistently trying to substitute some type of a 'rules-based order' for the supremacy of law in world affairs," the foreign minister said. "These rules themselves are invented depending on political expediency and are an illustration of double standards."

Relations between Western powers and Russia have been tense over the war in Syria, where Moscow is supporting President Bashar al-Assad's forces.

"The delivery started already and as President [Vladimir] Putin said, after that incident ... the measures that we will take will be devoted to ensuring 100 percent safety and security of our men," Lavrov told a news conference at the United Nations.

He added that the international community and UN agencies must make the return of refugees to Syria "a priority" as Russia pushes for reconstruction aid for its ally.

Russia and the United States are at odds over the Iran nuclear deal, although key US allies France and Britain have also vowed to defend the agreement that Trump ditched in May.

Trump has also faced global outrage over the US decision to recognize Jerusalem as the capital of Israel, disregarding UN resolutions that declare the city's final status must be resolved through negotiations.

"This time he blamed China only for interference, he did not mention Russia, well he didn't mention us before," Lavrov told reporters at the United Nations, commenting on Trump's US election meddling remarks.

Trump on Wednesday accused the Chinese government of seeking to influence the November 6 US congressional elections against his Republican Party. China has denied the allegation.

Lavrov also warned against attempts to contain Iran, saying that attempts to weaken Iran's position in order to stabilize Yemen, Syria, and Iraq would be unrealistic.

"Not a single country with such history, population and civilizational values as Iran can be locked in a cage within its borders," he said.

Asked to comment on a possible barter system that will circumvent US sanctions to allow Iran to sell oil, Lavrov said "all avenues, all ways are being discussed for Iran to receive what was promised by the (UN) Security Council."

He was referring to a Security Council resolution that endorsed Iran's 2015 nuclear deal with Britain, China, France, Germany, Russia and the United States.