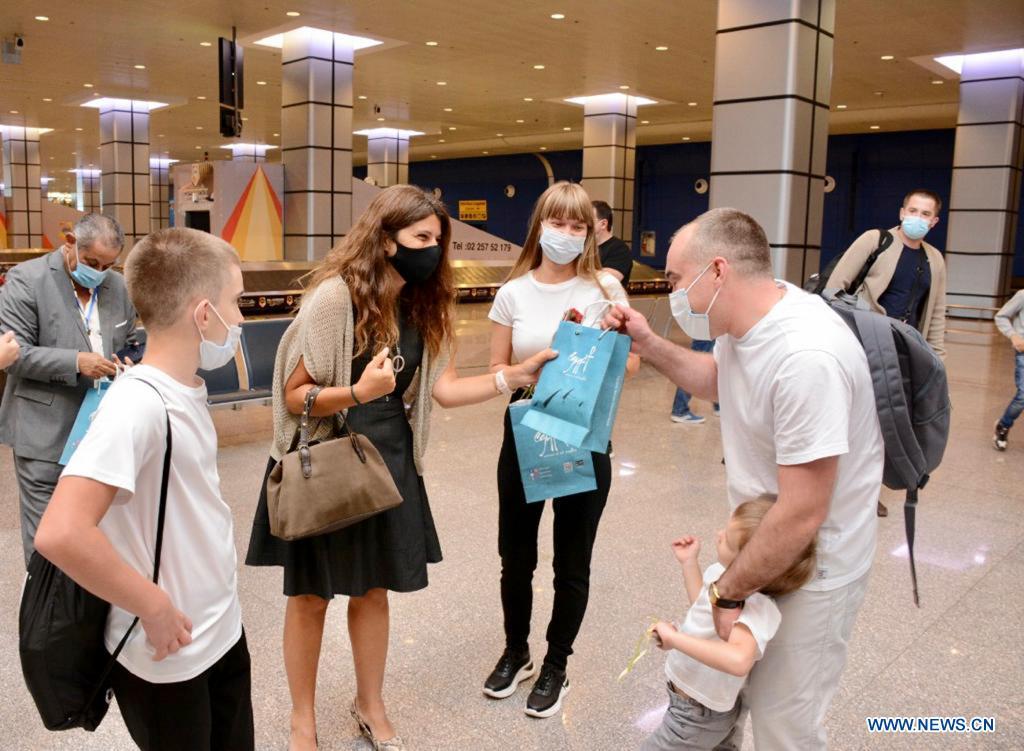 Russian tourists are welcomed by the staff member from Egyptian Ministry of Tourism and Antiquities upon their arrival at the airport in the resort city of Hurghada, Egypt, Aug. 9, 2021. Russia resumed on Monday direct flights to Egyptian Red Sea resorts of Hurghada and Sharm el-Sheikh, ending a ban that had lasted almost six years following the explosion of a Russian airliner that killed all 224 people on board. (Photo: Xinhua)

HURGHADA, Egypt, Aug. 9 (Xinhua) -- Russia resumed on Monday direct flights to Egyptian Red Sea resorts of Hurghada and Sharm el-Sheikh, ending a ban that had lasted almost six years following the explosion of a Russian airliner that killed all 224 people on board.

Three direct flights from Moscow arrived in the two cities, with Hurghada receiving two of them and Sharm el-Sheikh hosting another one, according to a statement of Egypt's Civil Aviation Ministry.

"The three flights marked a beginning of a new stage for resuming the Russian tourism to the two Red Sea resort cities of Hurghada and Sharm El-Sheikh," the statement added.

The Russian planes were welcomed by ceremonial water salute as a tradition of receiving new flights after landing, while the airport staff received the visitors with roses, souvenirs, and folklore music.

Then, the mask-wearing passengers passed through coronavirus precautionary measures.

"I had been very keen to visit Egypt every year since 2003, until direct flights (to Egypt) suspended in 2015," Natasha Botros, a Russian tourist, expressed her excitement over the Russian decision to resume flights to Hurghada.

The direct flights to the Red Sea resorts are supplements to the ongoing daily flights between Cairo and Moscow, with the aim of attracting the largest possible number of Russian tourists to Egypt, Abul-Enein, CEO of EgyptAir Airlines said.

There are seven direct Egyptian flights to the Red Sea resort cities per week, and each can accommodate 301 passengers to meet the expected demand of Russian tourists, while the Russian airliners organize five flights in the same duration, he said.

Russia ranks among the most important tourist markets to Egypt, as the number of its tourists to Egypt surpassed 3.1 million in 2014, nearly 33 percent of the total inbound tourists that year, said Lamia Kamel, assistant minister of Tourism and Antiquities for Promotion.

She confirmed that all staff in hotels, entertainment areas and museums have been vaccinated against COVID-19.

"The Russian tourists were excited to return to Hurghada and Sharm el-Sheikh to enjoy the sunny beaches, the remarkable weather, as well as sea activities," Kamel said.

Speaking to state-run Egyptian TV, Egyptian Ambassador to Moscow Ehab Nasr noted that the return of Russian direct flights is "a result of huge efforts and intensive communications."

More tourist flow will contribute to creating new jobs in Egypt, especially during the pandemic, Nasr said, expecting the number of direct flights from Russia to Hurghada and Sharm el-Sheikh will rise to 20 per week.

In October 2015, Russia suspended direct flights to Egyptian airports following a Russian plane crash in North Sinai. Since then, Egypt has worked on upgrading its safety and security measures at all airports nationwide.

In April 2018, Russia resumed flights between Moscow and Cairo, but maintained a ban on flights to Hurghada and Sharm el-Sheikh.