Russia's Sputnik V COVID-19 vaccine is highly effective in fighting off and neutralizing the aggressive coronavirus variant first discovered in Brazil, according to Russia's Direct Investment Fund (RDIF) and a study conducted by researchers in Argentina. 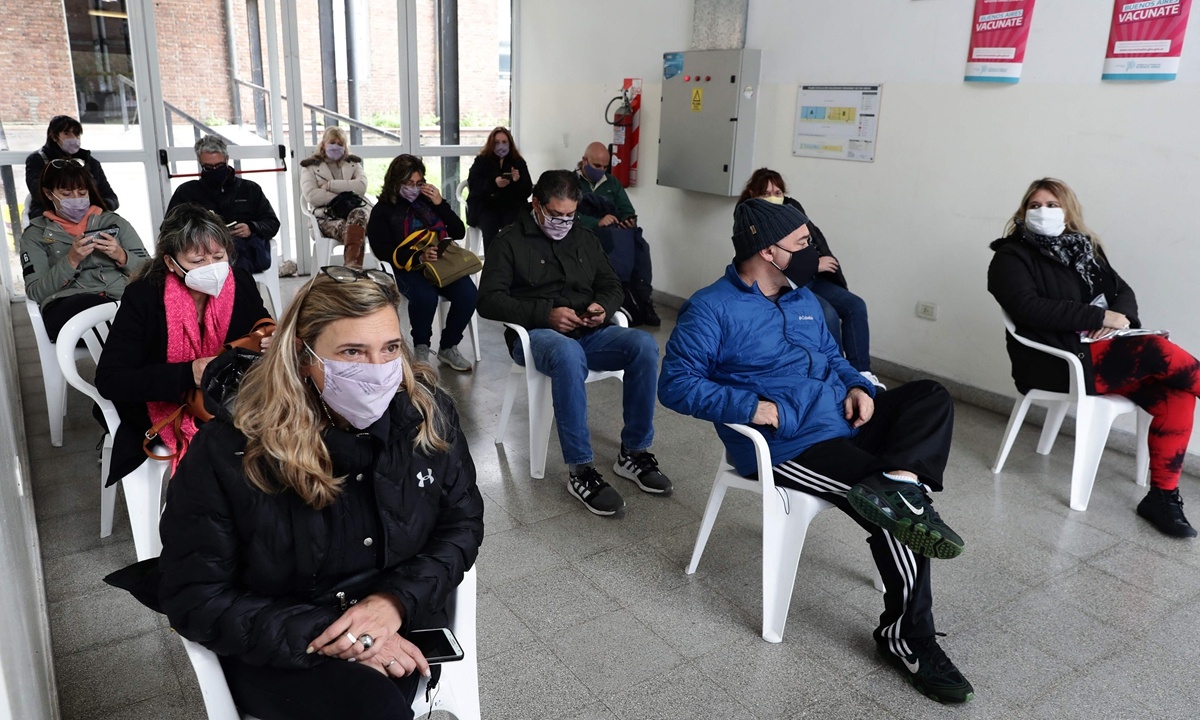 People wait to be inoculated with the Russian Sputnik V vaccine against COVID-19 at the Lanus National University in Buenos Aires, on Sunday. (Photo: VCG)

Brazil's P1 coronavirus variant, behind a deadly COVID-19 surge in Brazil, has spread throughout hard-hit Latin America. Scientists in Brazil have found that the variant's mutations could make it more resistant to antibodies, raising international concern over its potential to render vaccines less effective.

The Argentina-based study, carried out by the Dr Vanella Institute of Virology of the National University of Córdoba (UNC), however, found a strong immune response against the variant in those vaccinated with Sputnik V.

"The study confirmed that the immunity developed in people vaccinated with 'Sputnik V' neutralizes the Brazilian strain after having received two doses, and even after the first," the RDIF said in a statement on Monday.

According to the Argentine study, viewed by Reuters and cited by RDIF, 85.5 percent of individuals developed antibodies against the COVID-19 variant on day 14 following the first dose of the vaccine. That rate rose to nearly 100 percent by day 42, after an individual had received both doses.

Rogelio Pizzi, dean of the Faculty of Medical Sciences of the UNC, told Reuters the institute's study showed that the Russian vaccine successfully inhibits the variant. "The results are excellent. The vaccine works for this strain," Pizzi told Reuters, adding that the UNC Institute of Virology is also conducting studies on the strain originally detected in the UK.

Meanwhile, in a user's guide for the European COVID certificate, EU Member states can also choose, but are not required, to approve entry for those who received jabs from a vaccine approved in some member states, such as Russia's Sputnik V, which is used by EU member Hungary.

The "EU digital COVID certificate" comes into use on July 1.