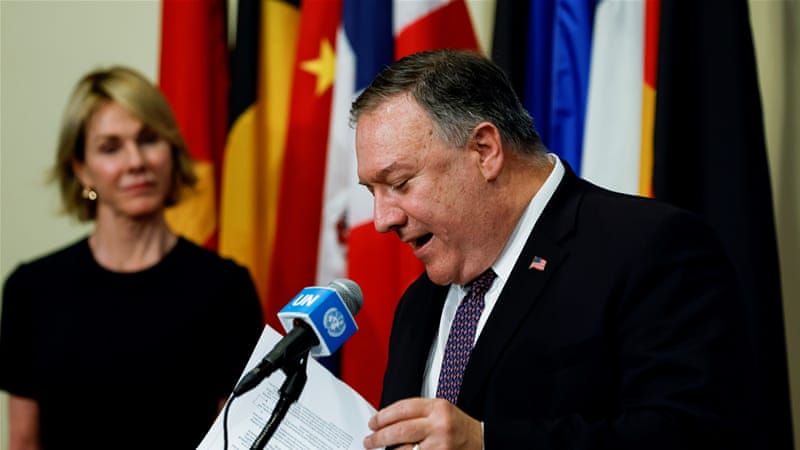 US State Secretary Mike Pompeo delivered the notification to demand the restoration of sanctions on Iran to the president of the UN Security Council. (Photo: Agencies)

The United States has no rights to restore United Nations (UN) sanctions on Iran as it has withdrawn from the Iran nuclear deal and failed to honor its obligations, the Russian Foreign Ministry has said.

The United States continues its "dangerous" steps in the UN Security Council in hope of realizing its own anti-Iranian plans, the ministry said in a statement Friday on the U.S. "illegal actions" to restore lifted sanctions against Iran.

All this happens after the U.S. administration officially pulled out of the Joint Comprehensive Plan of Action (JCPOA), commonly known as the Iran nuclear deal, and for more than two years has "rudely and shamelessly" trampled on its own obligations, the statement said.

"The United States has eliminated itself from the JCPOA membership and thereby deprived itself of the rights and opportunities to use the mechanisms stipulated in the deal and UN Security Council Resolution 2231," the statement read.

"We are convinced that the path of escalating tensions around Iran is erroneous and dead-end. We call on the United States to make a choice in favor of reasonable decisions, not to deprive itself of the opportunity to reach agreements with Iran," it added.