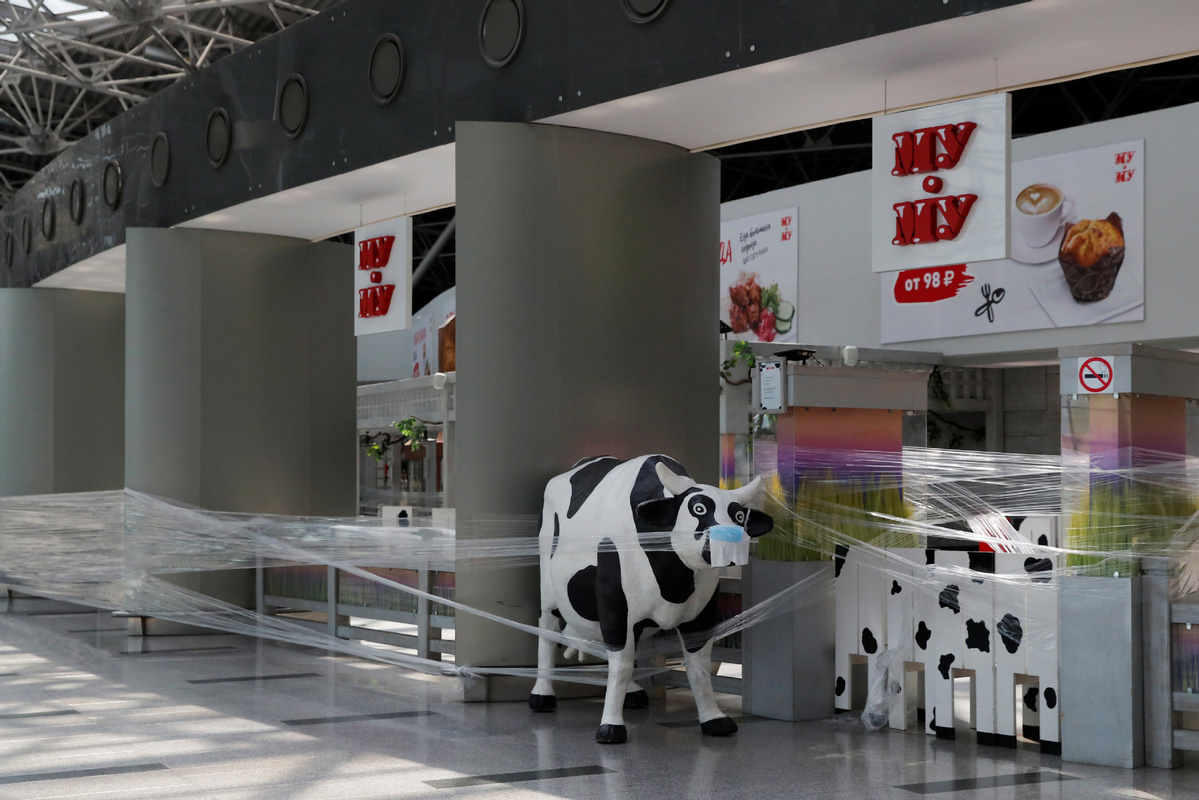 Closed restaurant and a sculpture of a cow with a protective mask are seen at Vnukovo International Airport amid the outbreak of the coronavirus disease (COVID-19) in Moscow, Russia, May 22, 2020. (Photo: Agencies)

Restaurants and entertainment venues have been ordered to close early across Russia from midnight on Wednesday, under stepped-up measures to curb a rise in coronavirus infections.

A notable exception is Moscow, where authorities say businesses will not be required to follow the instruction, which was announced in a decree by Russia's sanitary watchdog, Rospotrebnadzor. Officials in the capital said infections are trending downward and that virus-control methods have improved.

Signed by Anna Popova, the chief of Rospotrebnadzor, the decree requires all restaurants and other late-night establishments to shut their doors between 11 pm and 6 am.

"All those residing in Russia are obliged to ensure the use of hygienic masks in order to protect the respiratory system in places of mass gatherings, on public transport, including taxis, in parking lots and elevators," Popova said in the decree, which was published on the federal health authority's website. "The measures are being imposed in connection with the continuing global spread of the novel coronavirus."

The new rules are being introduced in response to widespread reports of shortages of available hospital beds and staffing, as well as of medications, across the country amid a second wave of infections in the pandemic, the Moscow Times reported.

Russia imposed a national mask mandate and other quarantine rules to slow the spread of COVID-19 at the start of its outbreak in spring. Moscow lifted the mandate in mid-July as COVID-19 cases began to decrease in the city, though health officials urged Russians to continue wearing masks to contain the virus.

On Wednesday, Russia reported over 16,000 new cases with 346 deaths, bringing the total number of infections to 1.56 million. The death toll surpassed 26,900.

The Russian Foreign Ministry said on Tuesday that Foreign Minister Sergei Lavrov will self-isolate after coming into contact with someone who tested positive for COVID-19.

Lavrov had been due to visit Bosnia and Herzegovina on Wednesday for talks with top officials. On Thursday he had planned to visit to Belgrade for a meeting with Serbian President Aleksandar Vucic.

The ministry's spokesperson Maria Zakharova said Lavrov, 70, "feels well", but all planned visits and meetings have been postponed.

In the capital, Vice-Mayor Anastasia Rakova on Wednesday said the government is glad to see increases in the number of COVID-19 patients that have recovered from the disease.

Rakova said that 3,577 patients had recovered since the previous day in Moscow, and they have been asked to donate their plasma for medical purposes.

Rakova said the capital will not shut down nightclubs or restaurants despite the decree from the Rospotrebnadzor.

"In Moscow, measures enabling digital controls have been undertaken in relation to visits to restaurants and clubs that stay open late," she said in a press conference. "These measure ensure immediate control and epidemiologic investigations in case visitors get infected.

"There is a significant decrease in the growth dynamics of COVID incidence observed in the city."

Rakova stressed that the city government considers it "possible to refrain from closing any sectors of the economy".