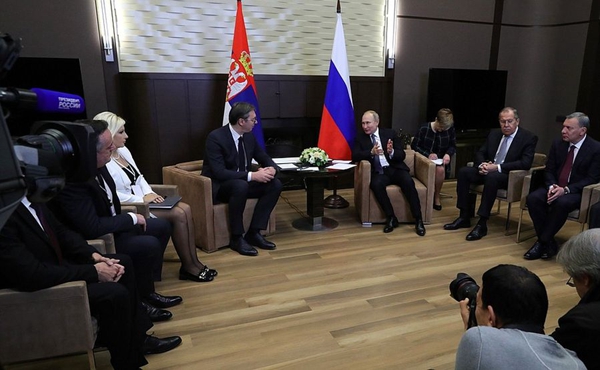 "All aspects of interaction between Russia and Serbia have a character of genuine strategic partnership," Putin said at a joint press conference with Vucic following their talks in the Black Sea resort of Sochi.

According to the Russian leader, bilateral trade amounted to 2.2 billion U.S. dollars in 2018 and it grew 9.5 percent in January-September this year.

Serbia has also joined the construction of an extension of the TurkStream natural gas pipeline from Russia to southern Europe, and the laying of the pipes on the Serbian territory will be finished in the next few weeks, Putin said.

An agreement was reached to increase the capacity of underground gas storage facilities in Serbia to 2 billion cubic meters from 750 million, he added.

The implementation of these large-scale energy projects will help to significantly strengthen the energy security of not only Serbia but also the entire Balkan region and Europe as a whole, Putin said.

Serbia will not reduce the level of cooperation with Russia despite its aspiration to join the European Union, Vucic said at the press conference.

His country will continue to protect the friendship with Russia and no one can undermine it, Vucic said.