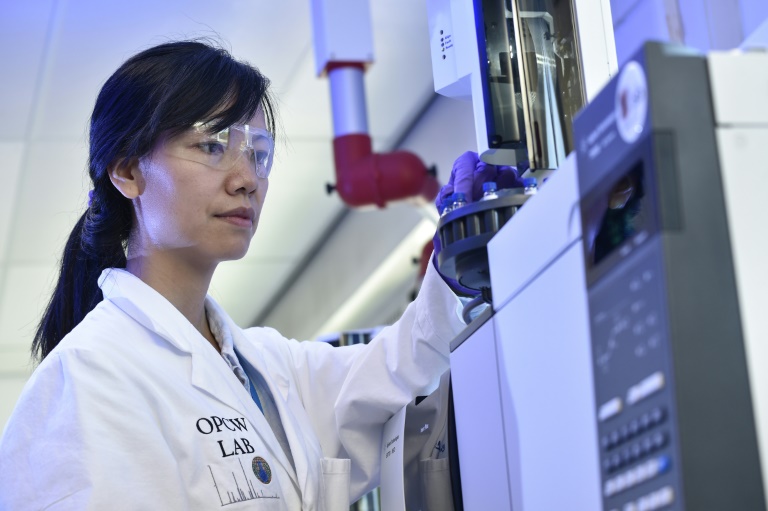 The meeting comes as inspectors from the Organisation for the Prohibition of Chemical Weapons (OPCW) are expected to unveil a long-awaited report into an alleged sarin and chlorine gas attack in April in the Syrian town of Douma.(Photo: AFP)

Britain and the United States Tuesday led a passionate call to halt the use of chemical weapons by empowering the world's watchdog to finger those behind attacks, triggering fierce opposition from Russia and Syria.

Both Moscow and Damascus have vehemently denied using poison gases and a rare nerve agent in recent months and years, and argued there should be no change to the mandate of the Organisation for the Prohibition of Chemical Weapons (OPCW).

"We all hoped that these terrible instruments of death would never be used again," British Foreign Secretary Boris Johnson told a special session of the OPCW's top policy-making body in The Hague.

"But the tragic reality is that chemical weapons have been used and are being used all over again."

In the absence of any mechanism to identify who is behind any such attacks, Britain supported by its allies has put forward a proposal that the OPCW should be mandated to "attribute responsibility for chemical weapons attacks".

The talks called by London come as the OPCW is expected to unveil soon its report into an alleged sarin and chlorine gas attack in April in the Syrian town of Douma. Medics and rescuers say 40 people were killed, blaming the attack on the regime of President Bashar al-Assad.

Johnson also highlighted the "appalling" nerve agent attack in March on former Russian double agent Sergei Skripal and his daughter in Salisbury, blamed by London on Moscow, saying areas in the town were still being decontaminated.

In 2017, the North Korean leader Kim Jong Un's half-brother was assassinated with a nerve agent in an attack in Kuala Lumpur airport.

"We in the international community cannot ignore these breaches of the Chemical Weapons Convention," Johnson said.

"None of us wants our children to grow up in a world where the use of chemical weapons becomes normalised. And I think today we all have the responsibility to act."

US Deputy Secretary of State John Sullivan agreed, saying "state and non-state actors are challenging the international norm against chemical weapons use".

"Allowing chemical weapons use to continue with impunity threatens our rules-based order and all nations around the world."

But Moscow hit back that changing the OPCW's mandate was a "destructive idea" which would undermine the body's legal basis.

Late last year, Russia wielded its veto power at the UN Security Council to effectively kill off a joint UN-OPCW panel aimed at identifying those behind attacks in Syria. And amid the dragging civil war in Syria, Moscow has grown increasingly protective of its Middle Eastern ally.

It has maintained that the Douma attack was fake, staged by the Syrian rescue volunteers known as the White Helmets.

The draft decision was "a clear attempt here to manipulate the mandate of the OPCW," said Russia's deputy minister for industry and trade, Georgy Kalamanov.

"The only international body or international court who can decide who would be guilty when we are dealing with members of the United Nations is the Security Council," he insisted.

Tensions ran high from the start. It took three hours of a heated debate just to adopt the meeting's agenda.

And there was no early consensus on the British draft, meaning delegates have to wait 24 hours before voting on it behind closed doors on Wednesday.

"If accountability is avoided the potential re-emergence and acceptance of chemicals as weapons of war and terror will not be deterred," outgoing OPCW head Ahmet Uzumcu warned, saying his body was ready and able to carry out a new mission.

Speaking for the EU, Judit Koromi said: "The question of attribution can and should be addressed by the OPCW."

"There can be no impunity and those responsible for such acts must be held accountable," she added.

A two-thirds majority, minus any abstentions, is needed for Britain's draft to pass.

Despite the opposition, a Western diplomat told reporters "we are quietly confident that the vote will go through".

Before its mandate expired in December, the panel known as the JIM (Joint Investigative Mechanism) had determined that the Syrian government used chlorine or sarin gas at least four times against its own civilians. The Islamic State group used mustard gas in 2015.