MOSCOW, Oct. 3 (Xinhua) -- Russia will maintain its dialogue with other oil-producing countries to ensure market stability and stimulate the sustainable development of the sector, Russian President Vladimir Putin said Wednesday. 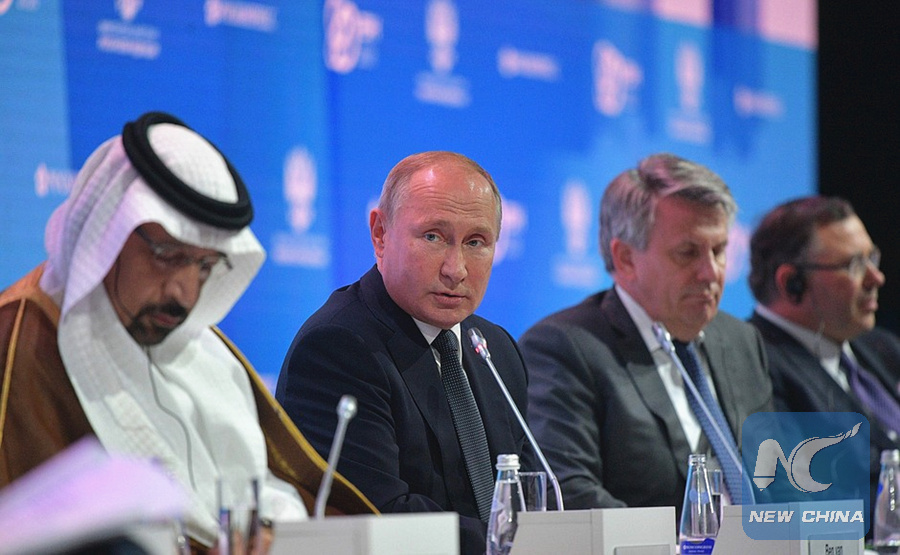 "Our position was and is a very responsible one," Putin said at a plenary session of the Russian Energy Week forum.

He recalled that in 2016 the Organization of Petroleum Exporting Countries (OPEC) and other oil producers, including Russia, agreed to cut output by 1.8 million barrels per day (bpd), of which Russia accounted for 300,000 bpd.

After an increase in prices that resulted from reduction, participants of the deal agreed in June 2018 to raise output by 1 million bpd.

Putin said that as a result of the deal, the market restored its balance of supply and demand, but the prices are still rising greatly due to "geopolitical issues," for which mainly the current US administration is responsible.

These issues, according to Putin, include the expectation of new US sanctions against Iran and a decline in production in North Africa and Venezuela.

Speaking about the complaints made by US President Donald Trump that oil prices are too high, Putin said: "I would tell him that if you want to find the culprit of the price hike, Donald, you need to look in the mirror."

He said that Russia is quite satisfied with an oil price range of $65-75 per barrel, which is sufficient to ensure the efficient operation of Russian companies and the investment process.

Russia has already increased oil output by 400,000 bpd in accordance with the agreement with its partners, and if necessary, Russia could raise it by another 200,000-300,000 bpd, Putin said.

Only a global partnership and joint work under joint rules can ensure the progress of the world energy sector and global energy security, Putin said.

"And, of course, a transparent and constructive dialogue between market players without a political background (is needed)," he said.