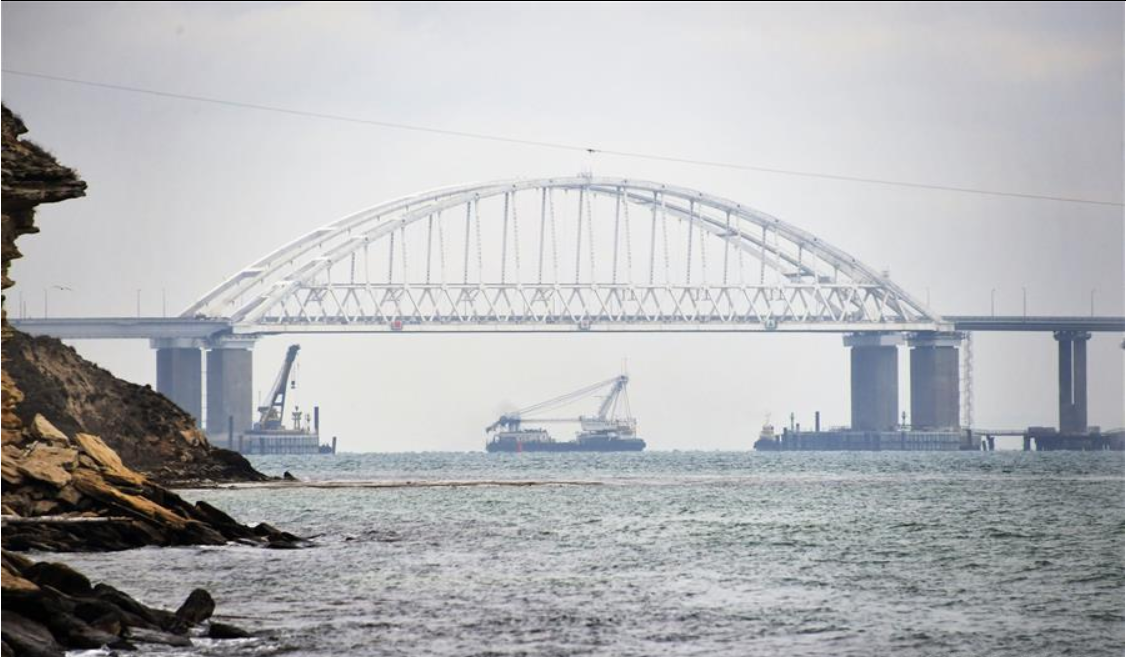 MOSCOW/KIEV, Nov. 28 (Xinhua) -- A spike in tensions between Russia and Ukraine around the Kerch Strait could inflame a volatile situation in the region and incur more Western sanctions against Moscow.

In the latest development, Ukraine decided to impose martial law in certain regions bordering Russia for 30 days starting at 9 a.m. local time (0700 GMT) Wednesday, after Russia shot at and seized three Ukrainian naval ships attempting to sail through the Kerch Strait from the Black Sea to the Sea of Azov on Sunday.

According to an agreement signed in 2003, the Sea of Azov is jointly owned by Russia and Ukraine, whose ships could freely cross the Kerch Strait and moor at their respective Azov ports.

In 2014, Crimea's incorporation into Russia allowed Moscow to fully control the strait and led to the consequent deterioration of relations between Moscow and Kiev.

Earlier this year, Russia inaugurated a bridge over the strait to connect Crimea with its mainland and started inspecting ships sailing through the strait, which Ukraine deemed as "aggressive actions."

However, Russia insisted that it has the sovereign right to build the bridge and carry out the inspections, saying the inspections of ships are aimed at ensuring security in the waters of the Azov Sea and the Kerch Strait and do not violate international law.

Amid rising tensions, Ukraine announced last week it would beef up its maritime defense capabilities to protect itself from a possible invasion by sea.

A day after the announcement, the Russian Foreign Ministry said Moscow was seriously concerned about Ukraine's continuing attempts to exacerbate the situation in the Sea of Azov.

Following Sunday's conflict, the Ukrainian Navy said that it had informed Russia in advance of the passage of its vessels through the Kerch Strait, calling Russia's blocking an "act of aggression."

Citing the ongoing Ukraine-Russian confrontation near the Kerch Strait, U.S. President Donald Trump on Tuesday threatened to cancel his scheduled meeting with his Russian counterpart Vladimir Putin during the G20 summit in Argentina.

So far, there has been no comment from the Russian side on Trump's remarks, but Moscow has said its activities in the region are legitimate.

The European Union (EU) and the North Atlantic Treaty Organization (NATO) also responded to the situation quickly, calling for a de-escalation of the tensions between Russia and Ukraine.

Maja Kocijancic, spokesperson for Foreign Affairs and Security Policy of the EU, urged all to act with "utmost restraint" to de-escalate the situation immediately.

"The events in the Sea of Azov are a demonstration of how instability and tensions are bound to rise when the basic rules of international cooperation are disregarded," Kocijancic said in a statement.

Earlier on Tuesday, NATO said in a statement on its website that NATO allies "call on Russia to ensure unhindered access to Ukrainian ports and allow freedom of navigation" and "to release the Ukrainian sailors and ships it seized, without delay."

Russia rejected any criticism of its actions, saying the latest conflict "was a well-thought-out provocation carefully devised in terms of place and form, aimed at inciting another hotbed of tension in this region, creating a pretext for toughening sanctions against Russia."

Russian and Ukrainian experts held different opinions on the nature and the cause of the latest conflict, but agreed that the tensions would not be easily eased.

Igor Delanoe, deputy director of the French-Russian Analytical Center Observo, a think tank, said Ukrainian President Petro Poroshenko aimed to stir up nationalist sentiment in hopes of boosting his ratings ahead of the presidential election in March 2019.

However, Ukrainian observer Vitaliy Tysyachnyy said the incident happened because Russia wants to prevent the creation of any Ukrainian military forces in the Sea of Azov as Poroshenko announced in September that his country will create a naval base there.

"The stability in the region is quite illusory given the events of 2014 ... there is a conflict of interests between Russia and Ukraine, and from time to time this conflict may escalate," said Grygoriy Lugovsky, a Ukrainian historian and independent political expert.

"But the scenario when the situation escalates further can ambiguously affect the situation both in Ukraine and in Russia," he warned.

Russian columnist Sergei Strokan believed that further developments will depend on the actions of the main external players, including the United States, the EU and NATO.

Western countries may use the Kerch Strait incident as a pretext to introduce new sanctions against Russia, or they may refrain from getting involved in yet another conflict with Russia fraught with unpredictable consequences, Strokan said.