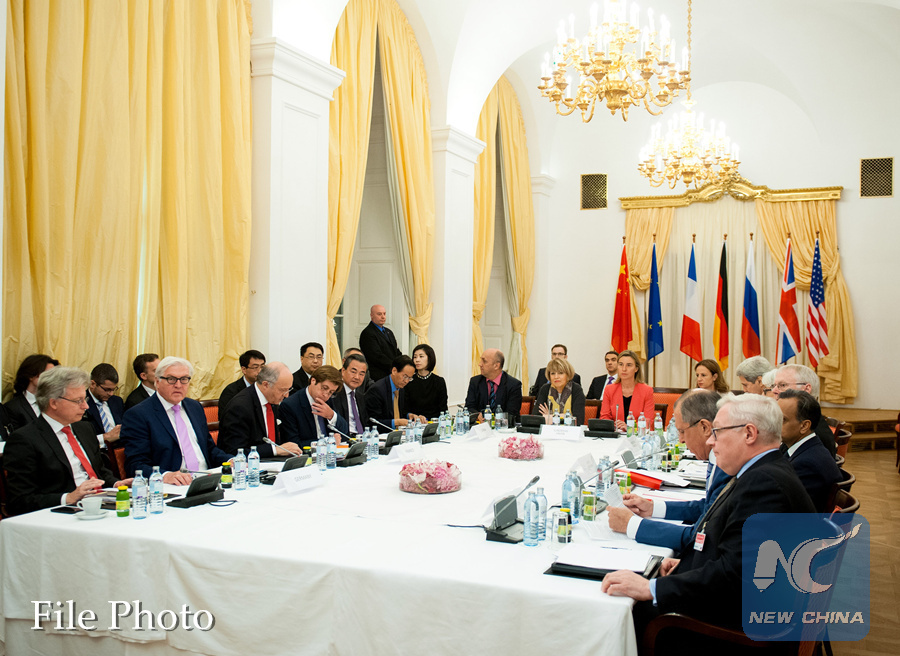 Foreign Ministers and delegates from P5+1, the five UN Security Council permanent members plus Germany, attend a meeting during the Iran nuclear talks at a hotel in Vienna on July 13, 2015. (Photo: Xinhua)

MOSCOW, Aug. 7 (Xinhua) -- Russia said Tuesday it would do everything to preserve and fully implement the Iran nuclear deal, also known as the Joint Comprehensive Plan of Action (JCPOA), which is under threat by US unilateral sanctions.

"The introduction of the first batch of US restrictions is aimed at disrupting the implementation of the JCPOA, which Washington unilaterally abandoned on May 8," a Russian Foreign Ministry statement said.

US President Donald Trump on Monday signed an executive order to restore sanctions against Iran.

The first batch of sanctions, which took effect Tuesday, target Tehran's purchase of US banknotes, trade in gold and other precious metals, as well as the use of graphite, aluminum, steel, coal, and software in industrial processes.

They will also affect transactions related to Iran's currency, the Rial, the issuance of sovereign debts and the country's automotive sector.

"We condemn any unilateral sanctions in circumvention of the decisions of the UN (United Nations) Security Council, especially when they have extraterritorial application and affect the interests of third countries," the Russian ministry said.

Long-term experience shows that it is not possible to get concessions from Iran by pressure, it said.

It recalled that the JCPOA, signed in 2015 between Iran, and the P5+1 -- Russia, France, China, Britain, the United States, plus Germany -- had proved its effectiveness.

The International Atomic Energy Agency (IAEA) regularly confirms that Iran strictly adheres to its obligations and applies in full the measures of verification and control envisaged in the plan, it said.

The international community must not allow such significant achievements of multilateral diplomacy to be sacrificed to US attempts to settle old political scores with Iran, in particular, those not related to the JCPOA, the statement said.