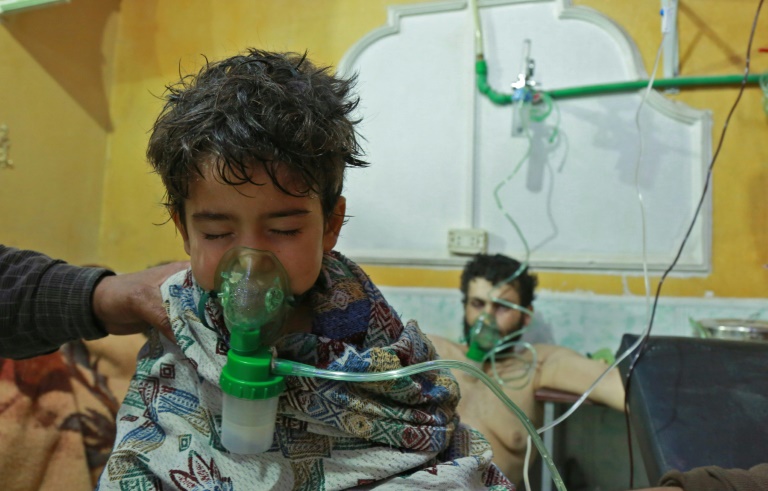 The Organization for the Prevention of Chemical Weapons in The Hague faces difficult talks over a new investigative team that will start work next year to apportion blame for attacks in Syria. (Photo: AFP)

Russia clashed bitterly with the West Monday as it tried to block the world chemical arms watchdog's new ability to attribute blame for attacks like those in Syria and Salisbury.

Accusations of hypocrisy and lying erupted as the Organisation for the Prohibition of Chemical Weapons debated how to move ahead with plans agreed in June to give the body new teeth.

Backed by China and Iran, Russia called last-minute votes on the OPCW's budget and on setting up an "expert group" to scrutinise the OPCW's new role in pointing the finger for toxic weapons attacks.

But the United States and Britain furiously accused them of trying to "turn back the clock of history", and said the work to attribute blame for attacks in Syria should start as planned early next year.

The West pushed through the new powers after a string of chemical incidents in Syria, as well as a nerve agent attack on Russian former double agent Sergei Skripal in the British city of Salisbury in March.

Russian envoy Alexander Shulgin said Western claims of chemical weapons use by Damascus and Moscow were "out and out lies" and an excuse for "raining down missiles" on Syria.

He said the June decision was "illegitimate" and went beyond the Chemical Weapons Convention, the 1997 agreement to rid the world of toxic arms, under which the OPCW was set up.

Syrian Deputy Foreign Minister Faisal Mekdad denied his country had ever used chemical weapons, in a fierce broadside at the western allies.

"You have taught people to use chemical weapons, you have used chemical weapons in the first two world wars." he said."Where is your morality? This is sheer hypocrisy and sheer lies."

US Ambassador Kenneth Ward said Russia's claims that the OPCW's new powers were illegitimate were "pungent hypocrisy", and warned against allowing a "new era of chemical weapons use to take hold".

"What have they done for the last few years but to connive with their Syrian ally to bury the truth of what has happened in Syria, along with the dead killed by the use of chemical weapons by the Assad regime," Ward said.

"And as if that wasn't bad enough, Salisbury comes along."

Britain accused Russia of carrying out the Salisbury attack using a Soviet-era chemical called Novichok and the West has since imposed a series of sanctions on Moscow.

British envoy to the OPCW Peter Wilson called any attempt to limit the watchdog's power to attribute blame for chemical attacks "unacceptable".

French ambassador Philippe Lalliot meanwhile said the Russian plan "at best" would indefinitely postpone the attribution role "and that is something we cannot accept".

Member countries will now vote on the watchdog's budget -- the first such vote in its history -- and on the plans for an "expert group" on Tuesday. The OPCW is meeting for two weeks.

The meeting is also the first since the expulsion of four Russians accused by Dutch authorities in October of trying to hack into the OPCW's computer system, using electronic equipment hidden in a car parked outside a nearby hotel.

At the time the organisation was investigating the attack on Skripal as well as a major chemical attack in Syria. The spying incident is not on this meeting's agenda, however.

The OPCW says the two-week meeting of the 193 member countries is meant to "discuss the future of the organisation".

New OPCW director-general Fernando Arias warned in his opening address on Monday that the "international norm against the use of chemical weapons has come under strain".

"Their repeated use poses a challenge that must be met with strong and unified resolve," he added.

Winner of the Nobel Peace Prize in 2013, the OPCW says it has overseen the destruction of 96.5 percent of the world's chemical arms stocks.

But in recent years it has seen its role expand to cover Syria and other attacks.

Arias said in the run-up to the meeting that he aimed to have a "very small but strong" investigative team start work early next year on attributing blame for all attacks in Syria going back to 2013.