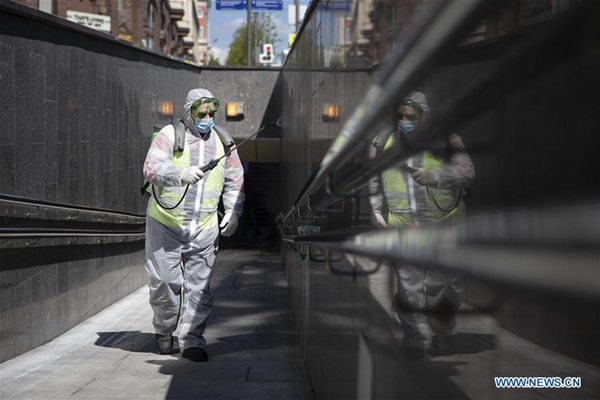 A municipal employee disinfects an underground pedestrian passage in Moscow, Russia, on May 28, 2020. [Photo/Xinhua]

Russia confirmed 8,371 new COVID-19 cases in the last 24 hours, raising its total number of infections to 379,051, its coronavirus response center said in a statement Thursday.

As of Wednesday, 300,312 people were under medical observation, Russia's consumer rights and human well-being watchdog Rospotrebnadzor said in a statement Thursday.

More than 9.7 million lab tests for COVID-19 have been conducted across the country so far, it added.

Experts believe that Russia has passed the peak of the pandemic.

In accordance with the decree, many trade and service enterprises will resume operations, while city residents will be allowed to go for walks, albeit with restrictions.

However, Sobyanin has extended the regime of self-isolation in the city to June 14.