WORLD Russian ambassador to US returns to Moscow for consultations

Russian ambassador to US returns to Moscow for consultations 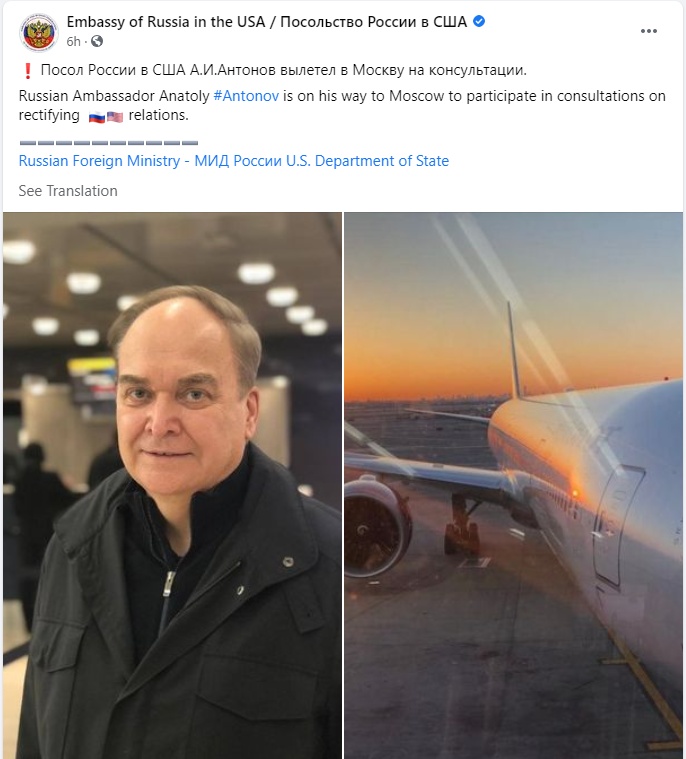 WASHINGTON - Russian Ambassador to the United States Anatoly Antonov on Saturday returned to Moscow for consultations, according to an announcement by the Russian Embassy in Washington.

"Russian Ambassador Anatoly Antonov is on his way to Moscow to participate in consultations on rectifying Russia-US relations," the embassy said in a post on its official Facebook page.

The embassy also posted two juxtaposed pictures, one showing Antonov, in a black jacket, at an airport and the other, an airplane -- which appeared to be the one Antonov will fly in -- with a Russian flag on the outside surface of the cockpit.

Antonov flew from New York, as there is no direct flight between Washington and the Russian capital amid the coronavirus pandemic, according to Russia's TASS news agency. He will arrive in Moscow on Sunday.

Russia recalled its top envoy in the United States after US President Joe Biden said in an interview with ABC News that aired Wednesday that Russia will "pay a price" for its alleged interference in the 2020 US election.

A US intelligence report released Tuesday directly accused Russian President Vladimir Putin of ordering a wide-ranging influence operation to interfere in the 2020 US election, intending to hurt Biden's campaign.

In the ABC News interview, Biden also agreed with the interviewer's claim that Putin was "a killer."

Responding directly to Biden's remarks, Putin said Thursday: "I would say to him: I wish you good health. I say that without irony or joking."

"I would like to offer President Biden (the opportunity) to continue our discussion, but on condition that we'll do so what is called live, online. Without anything pre-recorded, in an open and direct discussion," Putin said. "It seems to me, it would be interesting both for the Russian people and for the US people, as well as for many other countries."

"The current US administration never ceases to surprise us with its absurd public statements. It's not just about the unseemly attacks against Russia's top officials, but also the absurd accusations of Russia's interference in last year's presidential election in the United States," Maria Zakharova, spokesperson for the Russian Foreign Ministry said in comments posted Friday on the Facebook page of the Russian Embassy in Washington.