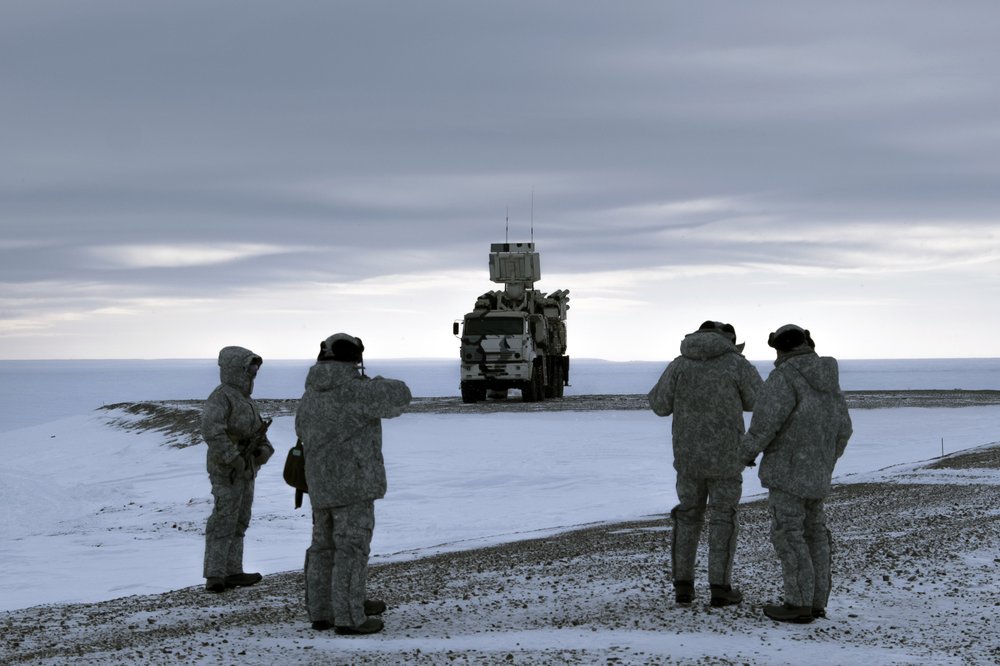 In this photo taken on Wednesday, April 3, 2019, Russian solders stand as Pansyr-S1 air defense system is seen in the background on the Kotelny Island, part of the New Siberian Islands archipelago located between the Laptev Sea and the East Siberian Sea, Russia. (Photo: AP)

MOSCOW, Oct. 21 (Xinhua) -- The Russian Defense Ministry denied Monday a report that an emergency situation occurred during the recent Grom-2019 (Thunder-2019) drills, after one of its submarines failed to launch a ballistic missile.

Earlier on Monday, the Vedomosti business daily quoted unnamed sources as saying that Russia's K-44 Ryazan nuclear submarine could not launch one R-29R ballistic missile, which failed to leave the silo, so the submarine had to return to base with an unexploded missile.

"Evaluating the data about the technical condition of one of the missiles of the Ryazan submarine, obtained immediately before launch, it was decided not to use it," the ministry's Zvezda broadcasting service said in a statement.

"The cancellation of the launch of this missile did not in any way affect the successful results of the Grom drills," it added.

The ministry said that all the tasks provided for during the drills were completed in full, while the missiles reached the specified ranges, hitting conventional targets and confirming their characteristics.

Last Monday, on the eve of the drills held from Tuesday to Thursday under the supervision of Russian President Vladimir Putin, the ministry said it planned to conduct 16 practical launches of cruise and ballistic missiles.

On Thursday, the Kremlin said in a statement that during the drills ballistic and cruise missiles were launched from submarines of the Northern and Pacific fleets from the Barents and Okhotsk seas at the Kura training grounds in Kamchatka and Chizha in the Arkhangelsk Region.

Some 12,000 troops, 213 Strategic Missile Forces launchers, up to 105 aircraft, up to 15 surface ships, five submarines as well as hundreds of military units and special equipment were involved in the drills.