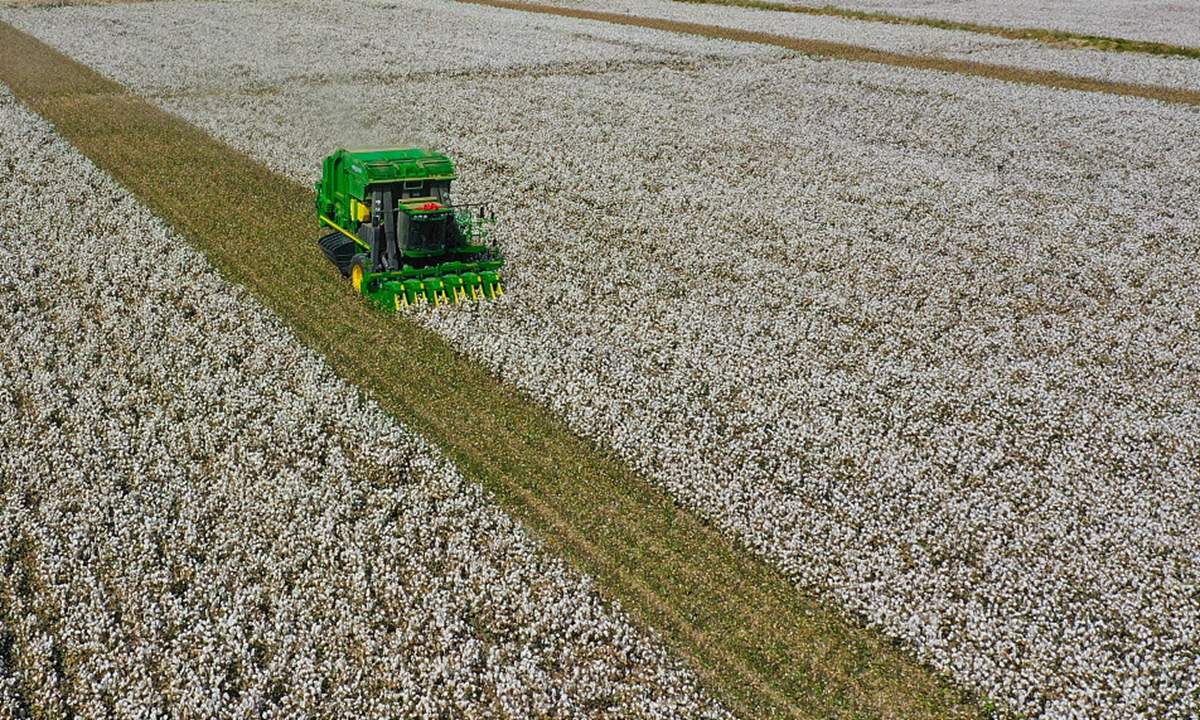 "However white the cotton, however red the tomatoes, to them they are all black," said Chinese Ambassador to Russia Zhang Hanhui about the malicious fabrications and sanctions imposed by some Western countries over China's Xinjiang policy on Wednesday. Zhang was speaking at a virtual promotional event for Xinjiang, winning wide support from Russian officials, media and organizations.

Themed "Xinjiang is a beautiful place," the event was hosted by the Chinese Embassy in Russia on Wednesday.
Ambassador Zhang started off by introducing some of the historic feats that Xinjiang has achieved over the years. In 2020, Xinjiang shook off absolute poverty as all of the province's 32 poverty-stricken counties and more than 3.08 million registered impoverished residents have been lifted out of poverty, the Global Times learned at the meeting.
Zhang noted that under the continuous efforts of local security departments, Xinjiang has not seen one single terrorist attack in more than four years, after years of turbulence that had badly haunted local people's normal work and lives.
"However, some anti-China forces have been blatantly distorting and smearing China's Xinjiang policy, making up fake stories about so-called forced labor and genocide. They do not really care about human rights, but only use it as an excuse to obstruct China's development," Zhang said.
"The vitriol has dismayed and enraged every Chinese citizen," he said, expressing absolute opposition to the West's double standards and interference.
At the event, a number of Xinjiang residents shared their stories, and refuted Western accusations about "concentration camps," "forced sterilization" and "religion blockade."
The owner of a car-selling company in Yecheng county named Aihebaiti spoke about how he managed to get rid of extremist thoughts and realized the horrible deeds of extremists by studying in a local training and education center.
"Not only was I able to shake off extremism through learning on anti-terrorism courses, but I learned many skills such as car repair that prompted me to open up this company," Aihebaiti said at the event. "I am very grateful that the center helped me back on the right track, and gave me such a promising and happy life."
Zeligulmayr, the owner of a beauty and skincare center in Kashi told attendees stories of her three children. Zeligulmayr said that the local government paid most of the fees when she gave birth at hospitals, and sent her nutrition bags regularly. School tuition fees are also paid by the government, the Global Times learned.
"I am leading a satisfied, happy life thanks to the support of the government, and claims of so-called genocide are a complete insult to our Xinjiang people. Stop talking nonsense and don't disturb our lives," she said.
Deputy of the Russian State Duma Sergei Gavrilov acknowledged Xinjiang's rapid socioeconomic development over the years, as well as the strong and effective measures in safeguarding the region against terrorism.
He appreciated the extended cooperation on the border between the two countries in Xinjiang, and called for a deepened relationship in fighting against foreign interference in each other's internal affairs.
In late September, 65 countries delivered a joint statement against interference in China's internal affairs under the pretext of human rights at the 48th session of the Human Rights Council, stressing non-interference in China's internal affairs including Hong Kong, Xinjiang and Tibet-related issues.
In addition, six member states of the Gulf Cooperation Council (GCC) issued a joint letter supporting China's position. More than 20 countries expressed their support for China in their national statements. All together, nearly 100 countries expressed their understanding and support for China's position.