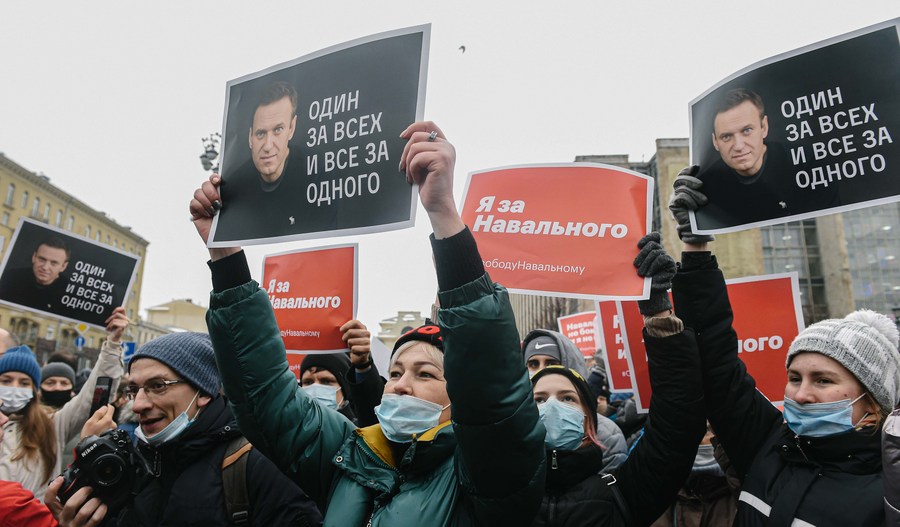 Navalny got a suspended sentence of 3.5 years behind bars in December 2014 for a fraud case concerning French cosmetics company Yves Rocher, and he was required to show up at Russia's Federal Penitentiary Service (FSIN) regularly during the probation period until the end of 2020.

The Moscow court ruled to replace Navalny's suspended sentence with real time in prison after the FSIN charged the Kremlin critic with breaching the probation conditions by failing to show up for checks.

Navalny's lawyer Olga Mikhailova said the defense will appeal the court ruling and resort to the European Court of Human Rights after all legal procedures in Russia are exhausted.

If the verdict takes effect, the 44-year-old opposition figure may need to spend 2.5 years behind bars as he has been under house arrest for 12 months.

Navalny was detained by FSIN officers on Jan. 17 upon his landing at a Moscow airport from Germany, where he received medical treatment for alleged poisoning over the past months.

The activist fell into a coma on a flight from the Russian city of Tomsk to Moscow on Aug. 20, 2020. He was then transferred to a hospital in Berlin with suspected poisoning symptoms.

Russian authorities have repeatedly denied the accusations and asked for solid evidence from Germany.

Navalny's detention sparked mass protests in major Russian cities at the past two weekends as his supporters took to the streets demanding his release. Western countries have also pressured Moscow to free him.