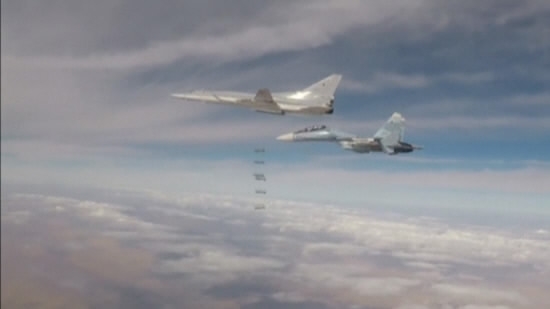 Russian long-range bombers hit ISIL targets in the northeast of Syria, in this still image taken from a video released by Russian Defense Ministry on Nov. 25, 2017. / Reuters Photo

Russian air strikes on Sunday killed 34 civilians, among them 15 children, in a village held by the ISIL group in Syria's eastern Deir Ezzor province, a monitor said.

The Britain-based Syrian Observatory for Human Rights said the strikes hit the village of Al-Shafah, on the eastern bank of the Euphrates River, in the early hours of Sunday morning local time.

The Observatory relies on a network of sources inside Syria, and says it determines whose planes carry out raids according to type, location, flight patterns and munitions used.

Syria's Deir Ezzor is the last ISIL-held territory in the country, after being driven from their major strongholds including their one-time de facto Syrian capital Raqa city.

The oil-rich eastern province that borders Iraq was once almost completely under ISIL control, but the jihadists now hold just nine percent of Deir Ezzor, according to the Observatory.

They have faced two separate offensives there, one led by the Syrian government with Russian backing and the other by the US-backed Syrian Democratic Forces, an alliance of Kurdish and Arab fighters.

More than 340,000 people have been killed in Syria since the conflict began in March 2011 with anti-government protests.