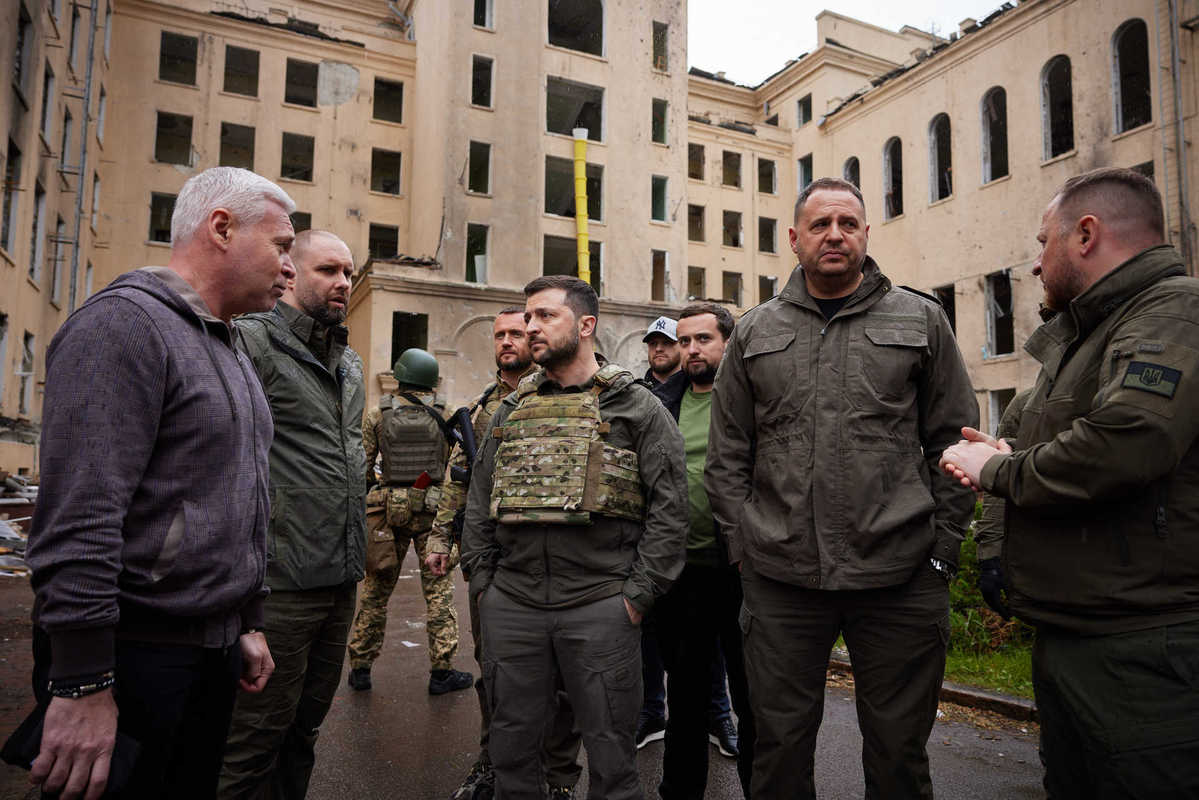 Ukrainian President Volodymyr Zelensky (center) talks with servicemen during his visit to the Kharkiv region on Sunday. (Photo: Xinhua)

Russian troops have entered the outskirts of the Ukrainian city of Sievierodonetsk after "very fierce "fighting, a Ukrainian official said on Monday as the special military operation approaches the 100-day mark.

Shelling killed two civilians and wounded five others as Russian troops advanced into the city's southeastern and northeastern fringes, said Serhiy Gaidai, the governor of the Lugansk region.

In a televised speech, Ukrainian President Volodymyr Zelensky said: "Some 90 percent of buildings are damaged. More than two-thirds of the city's housing stock has been completely destroyed. There is no telecommunication."

Russian Foreign Minister Sergey Lavrov on Sunday said the "liberation" of the Donbas, an industrial region which includes Lugansk and Donetsk, was an "unconditional priority" for Moscow.

Ukrainian forces in the Donbas said they were on the defensive all day on Sunday, as Russian forces fired on 46 communities in Donetsk and Lugansk.

Russian shelling also continued on Sunday across several regions such as in Novy Buh in Mykolaiv and Sumy.

On Sunday, Zelensky made his first trip to the battle-scarred east since the conflict began on Feb 24.

Zelensky's office posted a video on the Telegram platform of the president wearing a bulletproof vest while viewing destroyed buildings in Kharkiv and its surroundings.

Zelensky, conceding that one-third of the Kharkiv region remained under Russian control, said: "We will for sure liberate the entire area. We are doing everything we can to contain this offensive."

After visiting Kharkiv, Zelensky announced that he had fired the northeastern city's security chief in a rare public rebuke.

Zelensky said the man was dismissed "for not working to defend the city" from the first days of the conflict, "but thinking only of himself ", and that while others had toiled "very effectively", the former chief had not.

Although the president did not name the official, Ukrainian media reports identified him as Roman Dudin, the head of the Kharkiv region's SBU security service.

Ukraine's battlefield setbacks came as European Union leaders were scheduled to meet on Monday and Tuesday to discuss a new sanctions package against Russia, including an embargo on the country's oil.

On Sunday, the Committee of the Permanent Representatives of the Governments of the Member States to the European Union failed to reach a compromise on a lighter version of an oil embargo.

According to a source in the EU institutions in Brussels, the new round of European sanctions has been held up by Hungary, as the landlocked country is heavily dependent on Russian crude oil supplied via the Druzhba pipeline.

Ahead of the Monday summit, German Economy Minister Robert Habeck expressed fears that EU unity was "starting to crumble" and a draft statement of the meeting, seen by Reuters, indicated there will be little in terms of new decisions.

But EU foreign policy chief Josep Borrell said "there will be an agreement in the end", with a deal on the next sanctions package by Monday afternoon.

During an interview with France's TF1 television channel on Sunday, Lavrov said the West planned its anti-Russian sanctions long ago and is unlikely to lift them.

"At least the United States is saying, not publicly, but in contacts with its allies, that when the whole thing is over the sanctions will stay in place," Lavrov said, adding that they are not about Ukraine, which is used as an instrument, "a bargaining chip", but about containing Russia.