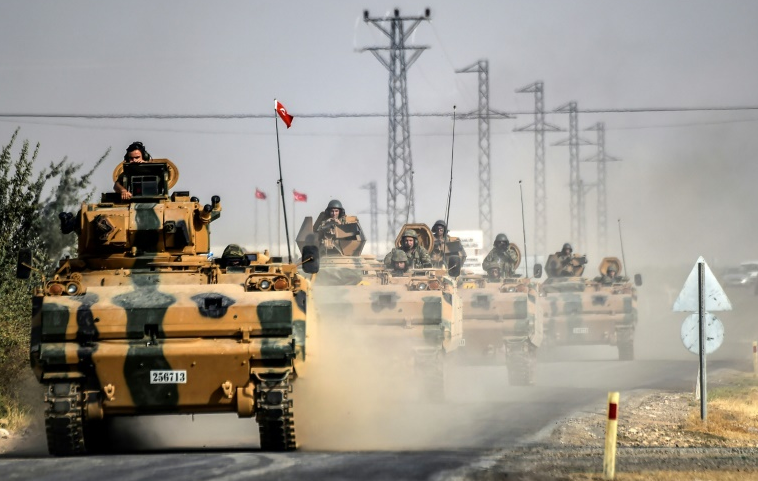 ANKARA, Feb. 28 (Xinhua) -- The tensions escalated between Turkey and Russia in Syria after an airstrike killed 33 Turkish soldiers on Thursday, the worst loss the Turkish military has suffered since an attack by Kurdish rebels in southeastern Turkey in 1993, said analysts.

Ankara, however, has avoided blaming Moscow for the attack but the airstrike prompted the NATO nation to seek military support from the West.

"This is a watershed moment for the Turkish-Russian relationship and an extremely serious situation because of the scope and the manner of the attack that killed so many Turkish troops," Hasim Turker, a senior analyst at the Ankara-based think-tank Bosphorus Center for Migration Studies, told Xinhua.

Turker, a former navy staff officer, said he is positive that Russia, the main backer of Damascus, is behind the airstrike in Syria's northwestern province of Idlib, the last-rebel stronghold that the Russian-backed Syrian forces have been trying to recapture since last December.

"This attack has confirmed Turkey's (returning) place among the traditional western alliance within a new Cold War," the analyst noted.

He argued that even though the latest incident is very unlikely to trigger an all-out war between Russian and Turkey, it has brought Ankara back to the western axis.

Denying involvement in the Syrian airstrike, Moscow said the Turkish troops had been "within the ranks of terrorists" targeted by the Syrian government forces.

Having clearly learned about the Turkish casualties, Russia "took exhaustive measures for a complete cessation of fire" by the Syrian military, the Russian Defense Ministry said Friday.

In response to Turkish officials' appeal to the US-led NATO for action, the US State Department said Washington was very concerned and stood by "our NATO ally Turkey."

Earlier in the day, the NATO called an extraordinary meeting in Brussels, after which NATO Secretary-General Jens Stoltenberg urged de-escalation in Syria and highlighted the organization's solidarity with Ankara.

For Turkey, it is trying to diffuse the explosive crisis and restore some form of stability in Idlib where Ankara has considerably beefed up its forces in recent weeks to strengthen its observation posts there.

Since the start of February, more than 50 Turkish soldiers have been killed in clashes, prompting severe retaliation against Syrian positions.

Turkey wants Syrian government forces to return to their former positions in line with a 2018 Russian-Turkish de-escalation agreement.

"In light of what has happened ... Turkey is likely to change its roadmap in Syria and be more aggressive against Syrian government forces, which will be the sole option," Murat Aslan, an analyst from the Foundation for Political, Economic and Social Research, said in a report.

"There is always a possibility" regarding a direct confrontation between Turkish and Russian troops, Aslan warned.

However, the existing economic, trade and energy partnership between the two countries, a rapprochement that has raised eyebrows in the West, would eventually prompt a military de-escalation, he noted.

Turkish President Recep Tayyip Erdogan and his Russian counterpart Vladimir Putin held a phone conversation on Friday over the situation in Idlib, the Turkish press reported, suggesting an appeasement.

They also decided to relaunch bilateral talks on the crisis, which had so far proved inconclusive, and try to arrange a top-level meeting soon, according to Russian Interfax.

Nevertheless, the Idlib crisis has brought about a new dimension to the humanitarian emergency unfolding at the Turkish border, where around 1 million displaced Syrian civilians, mostly women and children, are in a dire situation.

After a security meeting in Ankara following the mortal strike, Turkey suddenly decided to grant free access for Syrian refugees to enter Europe, a move aiming to put pressure on the European Union to support Turkish operation in Idlib.

Opening the border could unleash a repeat of the migration crisis of 2015-2016, when more than 1 million people had arrived by sea in Greece and crossed the Balkan until Turkey shut its border in a deal with the EU.

According to Turkish TV footage, by the early hours of Friday, hundreds of migrants, some carrying small children, were making their way to Greek and Bulgarian border posts.

In Istanbul, Turkey's economic hub, the local Syrian community has begun organizing buses to take people to the Greek and Bulgarian borders.

However, "this (Turkish) policy of blackmailing the EU will not yield results," argued Turker, saying it could prove counter-productive at a time when Turkey needs its western allies' support.