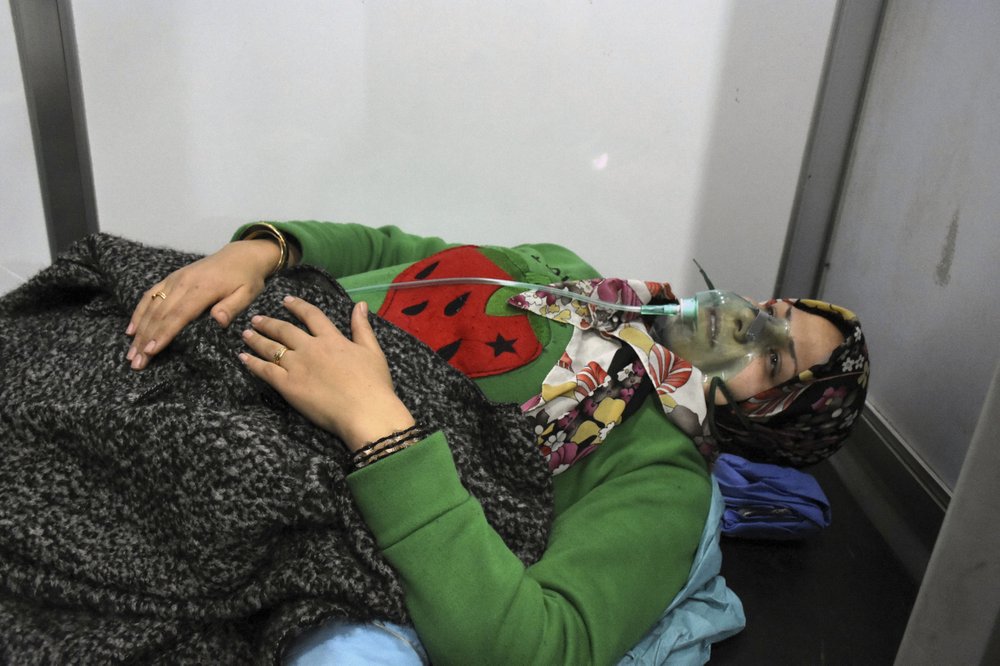 In this photo released by the Syrian official news agency SANA, shows a woman receiving oxygen through respirators following a suspected chemical attack on her town of al-Khalidiya, in Aleppo, Syria, Saturday, Nov. 24, 2018. Some 50 civilians were being treated following a suspected poison gas attack by Syrian rebel groups on the government-held Aleppo city in the country's north, according to Syrian state media. (Photo: AP)

Russian warplanes attacked rebel-held areas in northern Syria for the first time in weeks on Sunday, as Syrian officials said more than 100 people were treated at hospitals for a suspected poison gas attack in the northern city of Aleppo that Damascus and Moscow blamed on rebels.

The rebels, who have denied carrying out any poison gas attacks, accused the government of trying to undermine a truce reached by Russia and Turkey in September during a summit in the Russian city of Sochi. The targeted area is rebel-held and home to extremist groups opposed to the truce such as the al-Qaida-linked Horas al-Din, which has described the deal as a “great conspiracy,” and the Ansar al-Din Front.

The latest wave of shelling and airstrikes in northern Syria is the most serious violation of a truce reached by Russia and Turkey that brought relative calm to the country’s north for the past two months.

“The planes of Russia’s Aerospace Defense Forces carried out strikes on the detected artillery positions of terrorists in the area, from where the shelling of Aleppo civilians with chemical munitions was conducted late” Saturday, Konashenkov said.

The Britain-based Syrian Observatory for Human Rights and the Thiqa News Agency, an activist collective, said warplanes pounded rebel-held areas west and south of Aleppo city. The airstrikes were the first since the truce went into effect on Sept. 17.

Human Rights Watch’s Deputy Director for the Middle East and North Africa Lama Fakih said “serious reports of suspected chemical weapon attacks should not be left without investigation.” She added that all parties, including the Syrian government and Russia, should facilitate an investigation by the Organization for the Prohibition of Chemical Weapons into the suspected attack in Aleppo.

Konashenkov said earlier that Russian chemical weapons specialists have been dispatched to Aleppo. Russia is a close ally of President Bashar Assad and has intervened in recent years to turn the tide of the civil war in his favor.

“According to preliminary data, particularly the symptoms shown by the victims, the shells that bombarded residential areas of Aleppo were filled with chlorine gas,” Konashenkov said.

Syria’s forensic medicine general director, Zaher Hajo, told The Associated Press that all but 15 of the 105 people who were treated have been discharged. He said two people who were in critical condition have improved.

The Observatory said 94 people were treated, with 31 remaining in hospitals.

Turkey’s defense ministry in a statement said Sunday Minister Hulusi Akar spoke with his Russian counterpart Sergey Shoygu about the recent developments in northern Syria. The statement said the two exchanged views on “recent provocations that have been evaluated as aimed to undermine the Sochi agreement may continue and the need to be ready.”

A joint team from the United Nations and the Organization for the Prohibition of Chemical Weapons accused Syria’s government of using chlorine gas in at least two attacks in 2014 and 2015, and the nerve agent sarin in an attack in April 2017 in the town of Khan Sheikhoun that killed about 100 people. The UN-OPCW team also accused the Islamic State extremist group of using mustard gas twice, in 2015 and 2016.

The Britain-based Observatory, which relies on a network of activists and contacts throughout Syria, said the airstrikes hit the Rashideen district on the western outskirts of Aleppo and the village of Khan Touman south of the city.

The truce brokered by Russia and Turkey, which supports the rebels, has been repeatedly violated, but until Sunday there had been no airstrikes.