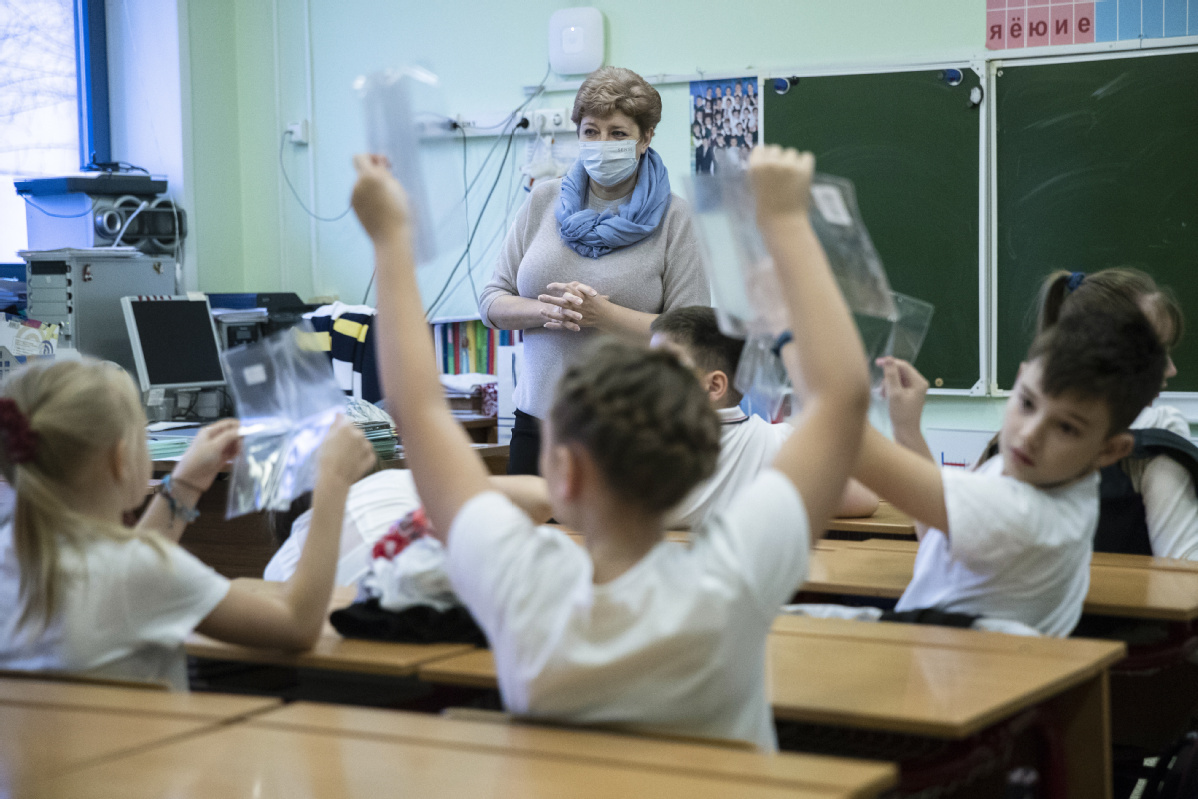 Children take part in a class in Moscow on Tuesday. The city has reported the most coronavirus cases in Russia. (Photo: AP)

Russia risks facing a second wave of the coronavirus pandemic that could be 10 times worse than the first in some regions, and the high rates of infection may persist for several months, Russian experts said.

However, they note that the spread of COVID-19 cases－with its highest concentrations in Moscow－is uneven across the country.

"The situation in the regions is very different," said Alexander Lukashev, who heads the Martsinovsky Institute of Medical Parasitology at the Sechenov First Moscow State Medical University.

Moscow, as the epicenter of Russia's COVID-19 outbreak with more than 377,000 confirmed cases, is followed by the Moscow region with almost 82,000 cases.

At the opposite end of the scale, Russia's two least-populated regions, the Nenets and Chukotka autonomous districts, have a combined caseload of 622.

"In some regions, the second wave may well be 10 times larger than the first," Lukashev said.

He said that, in the early stage of the first wave in March, the daily increase in new infections reached as high as 25 percent. "Now, we're only seeing this picture in certain regions," he added, pointing to Moscow and St. Petersburg, the country's second city.

Russia has seen a record-breaking surge in COVID-19 infections and deaths in recent weeks. On Thursday, the anti-coronavirus crisis center reported 15,971 new infections from the day before, with 290 deaths. More than 1.46 million infections－the fourth most in the world－have now been logged.

Areg Totolian, director of the St. Petersburg Pasteur Research Institute of Epidemiology and Microbiology, said the coronavirus infections would persist with the approach of winter, when respiratory infections will become more common. People should be prepared for these twin threats and make the psychological adjustments, he said.

"Autumn and winter are seasons for acute respiratory viral infections," said Totolian, who is also a member of the Russian Academy of Sciences."Vaccines against the coronavirus have appeared but after they are approved for widespread use, it will still be some time before we see a definite effect from the vaccinations. So we still definitely have several months ahead of potentially difficult times."

Totolian said that if the winter is relatively warm, with wet weather, the epidemiological situation may worsen. This is because viruses spread less easily in freezing weather. Even with these uncertainties, the scientist does not see the need to tighten the social restrictions imposed against the coronavirus.

Kremlin Spokesman Dmitry Peskov on Wednesday said the Russian government has no plans to introduce another lockdown. He points to the better preparedness of the nation now to handle a rise in cases, compared with the situation in the spring.

The Kremlin official said the healthcare system has been re-equipped to deal with the pandemic. "Right now, our efforts have brought results. The system is ready to withstand the pressure that the epidemic is putting on it," he said.

Peskov said that in the spring there were not enough supplies of personal protective equipment, as well as ventilators. "Then, the healthcare infrastructure to deal with the pandemic was under development. So extreme precautionary measures were needed," he said.