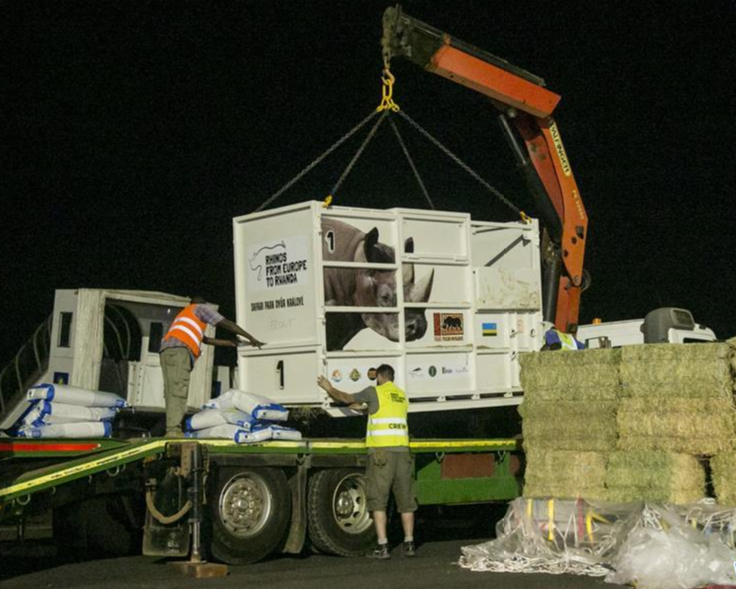 A crate with a rhino inside is loaded onto a truck at Kigali International Airport in Kigali, capital city of Rwanda, on June 24, 2019. (Photo: Xinhua)

The rhinos will be released into Akagera National Park, in eastern Rwanda, Rwanda Development Board (RDB) said on a Twitter post.

The move, facilitated by a collaboration among the European Association of Zoos and Aquaria, the government of Rwanda, and African Parks, a non-governmental conservation organization, is the largest ever translocation of rhinos from Europe to Africa, a joint statement said last week.

A chartered cargo plane carrying the five rhinos touched down at Kigali International Airport early Sunday. Officials from the conservation department at RDB, and African Parks, which jointly manages Akagera National Park with the RDB, witnessed the arrival.

"The translocation of these rhinos to Rwanda is a big boost to our tourism sector, which is our country's largest foreign exchange earner," Eugene Mutangana, head of the RDB conservation department, told Xinhua in a telephone interview.

The rhinos will be closely monitored for months in bomas before they are released to the wild in Akagera National Park, Mutangana said.

The five rhinos, three female and two male, and between two and nine years old, came from Safari Park Dvur Kralove of the Czech Republic, Flamingo Land of the United Kingdom and Ree Park Safari of Denmark.

They have been gathered at Safari Park Dvur Kralove since November 2018 before departing for Rwanda on Sunday.

Since 2010, Akagera National Park has undergone a revival, with poaching practically eliminated, allowing for key species to be reintroduced, including lions in 2015, which have since tripled in number, and rhinos in 2017, a decade after they were last seen in Rwanda.