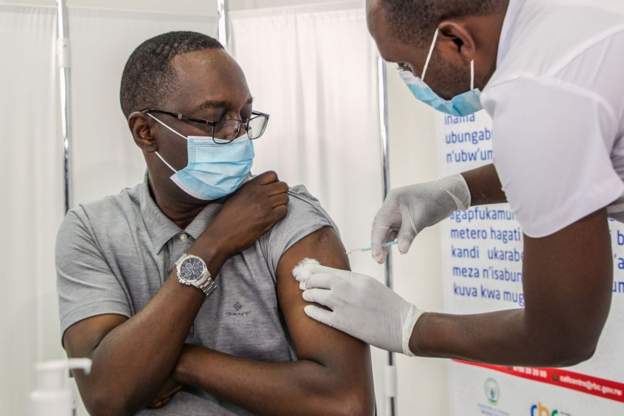 KIGALI, March 16 (Xinhua) -- Rwanda will continue administering the AstraZeneca vaccines as the reported side effects have not been confirmed, the country's Health Minister Daniel Ngamije said Tuesday.

Some European countries have suspended use of the AstraZeneca vaccine following reports of blood clots in some recipients. The World Health Organization (WHO) is conducting safety review of the vaccine.

"We are continuing to use the vaccine because the WHO has not come up with any evidence that back the claims that the AstraZeneca vaccine may cause blood clots among the recipients, and our health team has not received any reports of serious side effects from Rwandans who have received the first doses of the AstraZeneca vaccine," Ngamije said in a news program on the national broadcaster Rwanda Television.

According to him, over 300,000 Rwandans have received the AstraZeneca vaccine.

He urged the public to remain calm as the WHO hasn't concluded its safety review of the vaccine.

The minister said Rwanda continues negotiating with multiple partners, including international organizations and other governments, to acquire additional vaccines in order to achieve the inoculation rate at 30 percent of the population before the end of this year.

As of Monday, Rwanda has administered doses of COVID-19 vaccines to a total of 314,015 people in the country, according to the ministry.