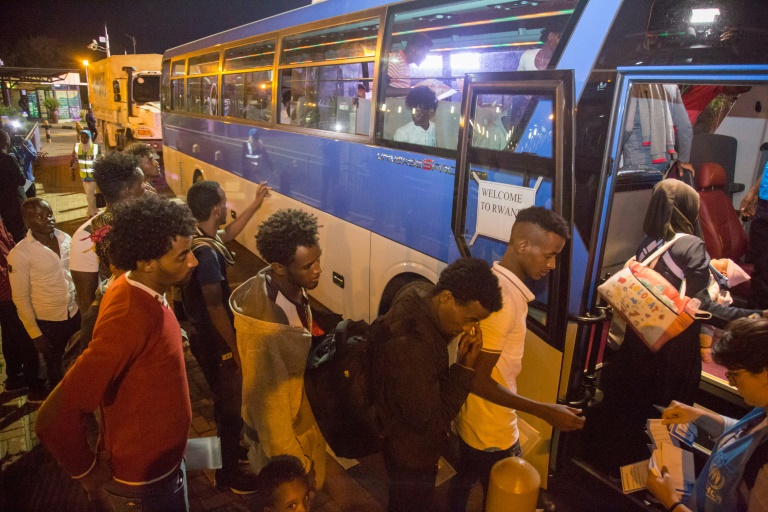 Rwanda first offered to take in Africans stuck in Libya back in November 2017, the same month a CNN report showed what appeared to be a slave market there. (Photo: AFP)

A group of 66 African refugees and asylum-seekers have arrived in Kigali from Libya, the UN said, the first in what could be thousands of people being helped to flee the conflict-torn country.

The move follows a pledge by President Paul Kagame in 2017 to offer a "home" to Africans after reports emerged of the torture, sexual violence and forced labour they suffer in Libya.

Earlier this month, Rwanda signed a deal with the African Union (AU) and the United Nations refugee agency UNHCR agreeing to take in African refugees and asylum-seekers stranded in Libya.

The Rwandan government has said it is prepared to accommodate as many as 30,000 evacuees, although the plan is for the program to unfold in batches of 500 to prevent the country of 12 million from feeling overwhelmed.

"Just landed!" the United Nations refugee agency wrote on its Twitter account as the group landed in the Rwandan capital late Thursday.

The youngest passenger was a two-month-old girl born in Libya to Somali parents.

UNHCR spokesman Babar Baloch told journalists in Geneva Friday that 26 of the evacuees were unaccompanied children.

"One evacuee had not been outside a detention centre for more than four years. All evacuees were either Sudanese, Somali or Eritrean," he said.

A UN official told AFP Wednesday that a subsequent flight carrying 125 people was planned for "between 10-12 October".

They will be housed in a transit centre in Rwanda before being resettled elsewhere unless they agree to return to their home countries.

The new arrivals will be resettled at the Gashora Refugee Transit Centre in Bugesera District, approximately 60 kilometres (37 miles) from Kigali.

The facility was established in 2015 to host Burundians, about 30,000 of whom have transited the country to flee political violence in their homeland.

Baloch said a psychologist, counsellors and other health professionals to aid those "who survived torture, sexual violence and human rights abuses during their time in Libya."

"The entire group has been granted asylum-seeker status, pending an assessment of their refugee claim by UNHCR," he said.

In the chaos that followed the fall and killing of former dictator Moamer Kadhafi in a 2011 uprising, Libya became a key transit point for sub-Saharan African migrants seeking to embark on dangerous journeys to Europe.

The UN says some 42,000 refugees are currently in Libya.

Kagame first offered to take in Africans stuck in Libya after a CNN report showed what appeared to be a slave market there.

The issue took on new urgency in July when more than 40 people were killed in an airstrike on a migrant detention centre in the Libyan town of Tajoura.

The UN has been criticised for its handling of a transit mechanism for evacuees from Libya established in 2017 on the other side of the continent, in Niger.

The facilities there have struggled with overcrowding and the slow pace of resettlement.

But UN and Rwandan officials say they have learned from Niger's experience.

While the influx of migrants, refugees and asylum-seekers to Europe has become a political flashpoint, countries in East Africa are often praised for their openness to those displaced by conflict in the region.

Uganda is host to around 800,000 refugees from war-torn South Sudan while countries in the region host hundreds of thousands of refugees from Burundi, Somalia and elsewhere.

At the end of 2018, the region hosted over four million refugees and asylum-seekers, according to the UNHCR.