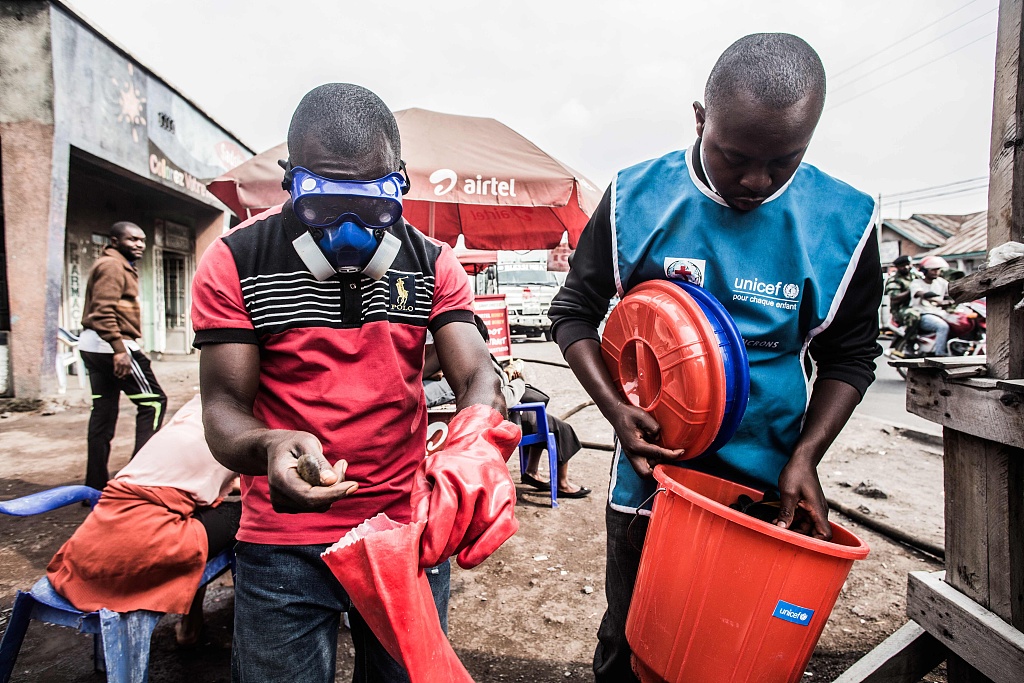 Health workers wear protective gear to mix water and chlorine in Goma on July 31, 2019. A second person has died of Ebola in the eastern DR Congo city of Goma, a major transport hub, the country's pointman for the epidemic told on July 31, 2019. (Photo: VCG)

"Rwanda has not closed its border with the DRC. What you are reading in media is not true, but people simply misunderstood the situation at the border this morning," Gashumba told Xinhua in a telephone interview.

People were delayed at the border in the morning as they were sensitized on signs and dangers of Ebola virus and measures to prevent themselves from being infected, she said.

Olivier Nduhungirehe, minister of state in charge of the East African Community in the foreign ministry of Rwanda, on a twitter post also refuted reports saying Rwanda closes its border with the DRC over fears of Ebola spreading.

"The border was not closed. This was a misunderstanding," said the official, who had been quoted as the source in some media reports who confirmed the closure.

The presidency's office of DRC said in a statement earlier on Thursday that Rwanda has closed its border with the DRC after a man died of Ebola in the eastern DRC city of Goma, which borders Rwanda to the east.

The man, in his 40s, has tested positive for the deadly virus and died on Wednesday in the populated city of Goma. He was the second confirmed Ebola case in the city.

The DRC health authorities announced late Wednesday night the confirmation of a third case in the city of Goma.

Rwandan health ministry on July 15 warned Rwandans against unnecessary travel to Goma, which shares the border with western Rwanda's Rubavu district with daily border crossings between the two countries estimated at about 100,000 people.

The World Health Organization last week commended Rwanda on its ongoing Ebola preparedness efforts and confirmed that no cases of Ebola have been reported from the central African country.