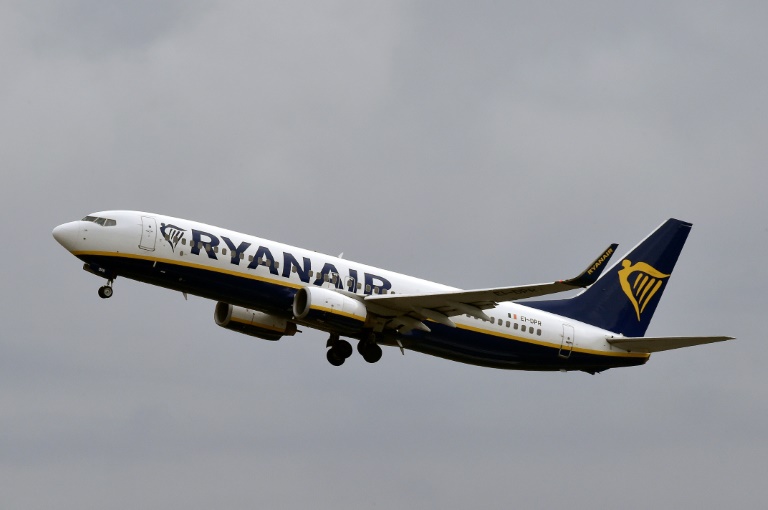 Ryanair has been hit by several strikes this year (Photo: AFP)

Ryanair on Wednesday pressed ahead with its cancellation of some 300 flights across Europe as its cabin crew began a two-day strike in Spain, Portugal, Belgium and Italy.

The Irish low-cost airline last week said the stoppage called by five unions over pay and working conditions would also force it to cancel a further 300 flights on Thursday.

The airline says the cancellations have affected some 100,000 passengers who have either been put on alternative flights, or applied for full refunds.

Ryanair, Europe's largest low-cost carrier, said it would operate over 2,100 flights on Wednesday "taking over 400,000 customers to their holiday destinations".

While the strikes are having a major impact across several European nations, Spain is the most affected country.

In Madrid airport, Ryanair employees handed out flyers to passengers with contact information for customer service, so that they could request a refund if their flight had been cancelled.

A spokeswoman for the USO union said inspectors from the labour ministry had turned up at Ryanair's base in the holiday island of Lanzarote.

Founded 33 years ago in Dublin, Ryanair boasts lower costs per passenger than its competitors.

But employees have long slammed their working conditions and the airline has been hit by several strikes this year.

Unions want the airline to give contractors the same work conditions as its own employees, and are calling for improved sick pay and a "fair living wage".

They are also asking that Ryanair staff be employed according to the national legislation of the country they work in, rather than that of Ireland as is currently the case.

Ryanair argues that since its planes fly under the Irish flag and most of its employees work on board planes, its staff are covered by Irish law.

The company defends the overall package offered to staff, saying they could earn up to 40,000 euros per year.

The strike by cabin crew comes after Ryanair was hit Tuesday with a third day of strikes by its pilots in Ireland over pay and other conditions, resulting in the cancellation of 16 flights affecting 2,500 passengers.