The newly-discovered Omicron variant is likely to fuel a surge in South Africa's coronavirus cases that could see daily infections treble this week, a top epidemiologist warned Monday. 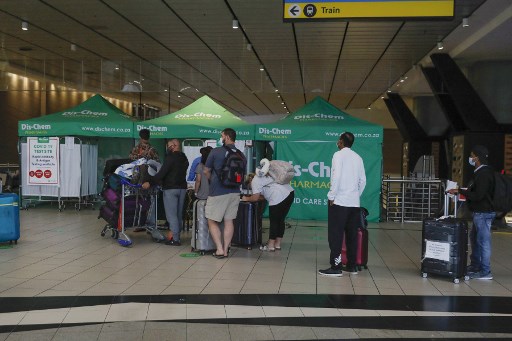 Travellers queue at an area for polymerase chain reaction (PCR) Covid-19 tests at OR Tambo International Airport in Johannesburg on November 27, 2021, after several countries banned flights from South Africa following the discovery of a new Covid-19 variant Omicron. (Photo: AFP)

Health monitors reported over 2,800 infections on Sunday, up from a daily average of 500 in the previous week and 275 the week before.

"We can expect that higher transmissibility is likely and so we are going to get more cases quickly," Dr Salim Abdool Karim said at an online health ministry press briefing.

"I am expecting we will top over 10,000 cases by the end of the week per day (and) pressure on hospitals within the next two, three weeks."

South African scientists announced the new highly-mutated variant on Thursday, blaming it for a sudden rise in infections in Africa's worst-hit nation.

The World Health Organization (WHO) has designated Omicron a variant of concern and is still assessing its virulence, although experts agree it is likely to be highly infectious.

There is also concern the variant could be more resistant to certain antibodies, although its ability to evade vaccines is still being assessed.

The severity of the disease it causes has not yet been determined, although initial evidence suggests symptoms are relatively mild.

"Even if Omicron is not clinically worse, and certainly the anecdotes don't raise any red flags just yet... we are going to see (rising cases) in all likelihood because of the rapidity of transmission," Karim said.

Dozens of countries have implemented travel bans on South Africa and its neighbours in a bid to keep Omicron out, although the variant now been detected in at least 11 other countries.